A new archaeological find in Botswana shows that our ancestors in Africa engaged in ritual practice 70,000 years ago — 30,000 years earlier than the oldest finds in Europe. This sensational discovery strengthens Africa’s position as the cradle of modern man. 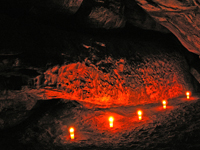 SACRIFIED TO THE PYTHON:
The world’s oldest ritual ceremonies are twice as old as previously thought. More than 70,000 years ago in a small cave in Botswana, humans sacrificed spearheads to the python. Photo: Sheila Coulson

A startling archaeological discovery this summer changes our understanding of human history. While, up until now, scholars have largely held that man’s first rituals were carried out over 40, 000 years ago in Europe, it now appears that they were wrong about both the time and place.

Associate Professor Sheila Coulson , from the University of Oslo, can now show that modern humans, Homo sapiens, have performed advanced rituals in Africa for 70,000 years. She has, in other words, discovered mankind’s oldest known ritual.

The archaeologist from the Department of Archaeology, Conservation, and Historical Studies, made the surprising discovery while she was studying the origin of the Sanpeople in cooperation with the University of Tromsø, Norway, and the University of Botswana. A group of the San live in the sparsely inhabited area of north-western Botswana known as Ngamiland.

Coulson made the discovery while searching for artifacts from the Middle Stone Age in the only hills present for hundreds of kilometers in any direction. This group of small peaks within the Kalahari Desert is known as the Tsodilo Hills and is famous for having the largest concentration of rock paintings in the world. The more than 3,500 paintings, some more than 1,500 years old, constitute an important piece of our cultural heritage and are the reason that Tsodilo is listed as a UNESCO World Heritage Site. 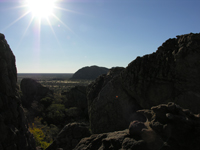 RITUAL CEREMONIES: People from the area held the ritual in a little cave in Tsodila Hills in Botswana. Foto: Sheila Coulson.

The Tsodilo Hills are still a sacred place for the San, who call them the “Mountains of the Gods” and the “Rock that Whispers”. San guides who lead archaeologists to the hills must first check with their deity to ascertain whether they are welcome there.

The python is one of the San’s most important animals. According to their creation myth, mankind descended from the python and the ancient, arid streambeds around the hills are said to have been created by the python as it circled the hills in its ceaseless search for water.

Sheila Coulson’s find shows that people from the area had a specific ritual location associated with the python. The ritual was held in a little cave on the northern side of the Tsodilo Hills. The cave itself is so secluded and access to it is so difficult that it was not even discovered by archaeologists until the 1990s. The first archaeologists at the site noticed two paintings on one side of the cave and a rock with a large number of indentations in it on the other side.

When Coulson entered the cave this summer with her three master’s students, it struck them that the mysterious rock resembled the head of a huge python. On the six meter long by two meter tall rock, they found three-to-four hundred indentations that could only have been man-made.

“You could see the mouth and eyes of the snake. It looked like a real python. The play of sunlight over the indentations gave them the appearance of snake skin. At night, the firelight gave one the feeling that the snake was actually moving.” said Sheila Coulson to the University of Oslo’s research magazine Apollon.

They found no evidence that work had recently been done on the rock. In fact, much of the rock’s surface was extensively eroded.

When they saw the many indentations in the rock, the archaeologists wondered about more than when the work had been done. They also began thinking about what the cave had been used for and how long people had been going there. With these questions in mind, they decided to dig a test pit directly in front of the python stone.

At the bottom of the pit, they found many stones that had been used to make the indentations. Together with these tools, some of which were more than 70,000 years old, they found a piece of the wall that had fallen off during the work. 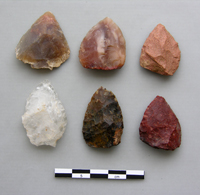 Rare quality:
The spearheads were
particularly beautiful
and were brought
from hundreds of
kilometers away. Photo: Sheila Coulson

In the course of their excavation, they found more than 13,000 artifacts. All of the objects were spearheads and articles that could be connected with ritual use, as well as tools used in carving the stone. They found nothing else.

As if that were not enough, the stones that the spearheads were made from are not from the Tsodilo region but must have been brought from hundreds of kilometers away.

The spearheads are better crafted and more colourful than other spearheads from the same time and area. Surprisingly enough, it was only the red spearheads that had been burned.

“Stone age people took these colourful spearheads, brought them to the cave, and finished carving them there. Only the red spearheads were burned. It was a ritual destruction of artifacts. There was no sign of normal habitation. No ordinary tools were found at the site. Our find means that humans were more organised and had the capacity for abstract thinking at a much earlier point in history than we have previously assumed. All of the indications suggest that Tsodilo has been known to mankind for almost 100,000 years as a very special place in the pre-historic landscape.” says Sheila Coulson. 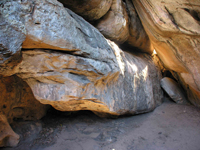 MAN-MADE: On this six meters long by two meter high stone, which resembles a python, researchers found 300-400 indentations that must have been made by humans. Photo: Sheila Coulson.

Sheila Coulson also noticed a secret chamber behind the python stone. Some areas of the entrance to this small chamber were worn smooth, indicating that many people had passed through it over the years.

“The shaman, who is still a very important person in San culture, could have kept himself hidden in that secret chamber. He would have had a good view of the inside of the cave while remaining hidden himself. When he spoke from his hiding place, it could have seemed as if the voice came from the snake itself. The shaman would have been able to control everything. It was perfect.” The shaman could also have “disappeared” from the chamber by crawling out onto the hillside through a small shaft.

While large cave and wall paintings are numerous throughout the Tsodilo Hills, there are only two small paintings in this cave: an elephant and a giraffe. These images were rendered, surprisingly, exactly where water runs down the wall.

Sheila Coulson thinks that an explanation for this might come from San mythology.

In one San story, the python falls into a body of water and cannot get out by itself. The python is pulled from the water by a giraffe. The elephant, with its long trunk, is often used as a metaphor for the python.

“In the cave, we find only the San people’s three most important animals: the python, the elephant, and the giraffe. That is unusual. This would appear to be a very special place. They did not burn the spearheads by chance. They brought them from hundreds of kilometers away and intentionally burned them. So many pieces of the puzzle fit together here. It has to represent a ritual.” concludes Sheila Coulson. 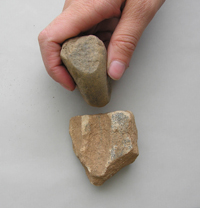 A PERFECT FIT: At the bottom of their excavation, Sheila Coulson found this tool that was used to scrape out some of the intentattions on the python stone. Photo: Sheila Coulson.

One is compelled to wonder why no one has made this discovery before. In fact, Sheila Coulson is one of the few archaeologists studying the Middle Stone Age in Africa. The Middle Stone Age spans the period from 250,000 until 40,000 years ago, yet very few human traces have been found from that period.

Archaeologists who are interested in Africa —especially East Africa— have most often concentrated on the many extremely old finds that can tell us more about human history from the Early Stone Age, which lasted from about two million until 250, 000 years ago.

Stone tools are a signature of the past. A way to differentiate between the two periods is to study how the tools were made.

It was a major archaeological find five years ago that made it possible for Sheila
Coulson to date the finds in this little cave in Botswana. Up until the turn of the century,
archaeologists believed that human civilisation developed in Europe after our ancestors migrated from Africa. This theory was crushed by Archaeologist Christopher Henshilwood when he published his find of traces from a Middle Stone Age dwelling in the Blombos Cave in Southern Cape, South Africa.

“That was the first solid archaeological evidence to demonstrate that early Homo sapiens were thinking abstractly and behaving like modern people long before it was thought to be possible. It became clear that Africa was not just the place that people became physically modern, but that many culturally modern practices were present in Africa long before they appeared in Europe.”

Since the publication of the find at Blombos, archaeologists from other parts of the world have come forward with similar evidence to confirm the earlier development of culturally modern practices. “The finds at Tsodilo fit this pattern”, Sheila Coulson says.

But in contrast to the finds in Blombos and other areas of the world that show that people were already modern 70,000 years ago, the cave in Botswana has never been used as a dwelling. For over 70,000 years, people came to this cave for the sole purpose of performing rituals, and nothing else.

Torfinn Ørmen , a zoologist who lectures on human evolutionary history at the University of Oslo, says that this is the biggest archaeological discovery in a long time.

“Sheila Coulson’s discovery is going to garner attention the world over. This is the oldest ritual site that we know of and it was in use before physically modern man left Africa”, Ørmen points out. He explains that the San, who are also referred to as Bushmen, belong to the most ancient race of humans. The San, together with the Khoi (or Khoikhoi), separated from the rest of the worlds people about 70,000 years ago. Today they are commonly refered to as the Khoi-San people. The Khoi and the San are quite similar and were displaced by both the Europeans and the Bantu before and during colonization.

“Some researchers believe that modern man descended from the San. What is certain is that the San are a very old people and that they have a very deep connection to this area of Botswana. The Tsodilo Hills are the San people’s most sacred place; they have had a connection to it for thousands and thousands of years”, says Torfinn Ørmen.