Researchers at the University of Oslo, Norway, have discovered a completely new group of organisms that includes some of mankind’s most distant relatives. When the entire genome of this microscopic organism has been mapped, we will know even more about evolutionary events that took place one billion years ago.

Biologists at the University of Oslo, Norway, in cooperation with Spanish, French, and Danish researchers have discovered a new branch on the evolutionary tree. The organisms, belonging to the group of Telonemia, are microscopic single-celled organisms that are principally built up in the same basic way as human cells. The evolutionary split between Telonemia and the single cell ancestors of humans took place about one billion years ago.

“From what we know about similar organisms, this new group of organisms may have a greater genetic diversity than all known genomes of mammals, fish, birds, and reptiles,” says researcher Kamran Shalchian-Tabrizi from the University of Oslo’s Centre for Ecological and Evolutionary Synthesis (CEES).

The first species of Telonemia was discovered as far back as 1913, but researchers at that time had no idea what part of the evolutionary tree it belonged to. Until recently, Telonemia was thought to be very rare and to only live in a few areas of the world’s oceans; it has now been found in oceans the world over. 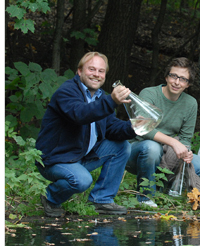 In All of the Worlds Oceans: Telonemia isn’t exclusive to the world’s oceans. University of Oslo professor Kjetill S. Jakobsen and researcher Kamran Shalchian-Tabrizi say that they are excited that it now appears that Telonemia can also be found in fresh water as well. Photo: Ola Sæther.

“Telonemia species eats other single-cell organisms and planktonic algae, and in turn is eaten by animal plankton. We are convinced that this group plays a central role in the ocean’s food chain and is a fragile piece of the greater ecological interplay,” says professor Kjetill S. Jakobsen to the research magazine Apollon.

Telonemia also eats algae. Thus, it is possible that Telonemia could regulate some types of algal blooms.

Even though up to 1000 Telonemia cells can be found in a single litre of seawater, finding one is no easy task. At only four-to-sixteen micrometers in size, researchers can catch a glimpse of the organism with a light microscope, but an electron microscope is needed to study its body and inner structure.

When the Norwegian Professor of Oceanography and Zoology Fridtjof Nansen sailed the polar vessel Fram through the artic in the late 1800s, he used a plankton-net with relatively coarse mesh to investigate the sea’s microscopic creatures. It is not surprising that he did not find a single Telonemia.

It is much more effective to search for the tiny organisms by looking for their DNA signature in water samples.

“By using microscopy and cell cultivation, we can correlate DNA signatures in water samples to the different organisms in a water sample. It is the opposite of the classical method for finding single-celled organisms,” says Professor Dag Klaveness from the University of Oslo’s Program for Plankton Biology

Eight new groups of Telonemia have now been found by the Norwegian researchers, with at least one species in each group.

Only a few of Telonemia’s genes are currently known to researchers, but it is likely that the species has somewhere between 10,000 to 30,000 genes. By comparison, humans have about 25,000 genes.

“While we are certain that Telonemia occupies its own branch, we are still not exactly sure of its placement on the evolutionary tree. Once we have mapped its entire genome, we will be able to determine precisely where it separated from similar organisms,” says researcher Kamran Shalchian-Tabrizi.

Although there is a great genetic difference between human beings and Telonemia, researchers can, nevertheless, recognise some common genes. To calculate all of the mutations in evolutionary history, researchers are using phylogenetic analysis programs that require massive computing power.

“By mapping the changes in the genetic material of all of the main branches in the tree of life, we can see when different traits developed and were lost. In that way, we can reconstruct the traits of our early ancestors, the adaptations species went through, whether there was an explosive of many species simultaneously, the origin of genes, and how the genes have changed. Gene mapping and sequencing also allows us to answer questions about evolutionary events and to gain understanding into how biological processes operate in animals and humans,” says Professor Kjetill S. Jakobsen. He believes that medical researchers can greatly benefit from the results of this type of research.

As an example, Professor Jakobsen cites the need for a better understanding of how Telonemia species eat other living cells so effectively and how knowledge of that process might be useful to medical researchers in the fight against cancer.

In order to study Telonemia more closely, researchers at the University of Oslo must cultivate Telonemia species in the laboratory. That is no small task, as they are extremely picky eaters. During the last eight years, Professor Klaveness has developed techniques for cultivating the microscopic species.

Additionally, he has spent long hours in the field searching for Telonemia and has recently discovered that the tiny organism may be found in nutrient poor fresh water in addition to salt water. Remarkably, he found them in a deep, pristine body of water high up in the mountains between the Norwegian capital, Oslo, and the town of Bergen.

He is now ready to begin searching for Telonemia species in all types of fresh water in Norway.