The Tree of Life Has Lost a Branch

Norwegian and Swiss biologists have made a startling discovery about the relationships among organisms that most people have never heard of. The Tree of Life must be re-drawn, textbooks need to be changed, and the discovery may also have significant impact on the development of medicines.

Changed the Tree of Life
Evolutionary biologists Marianne Minge, Kamran Shalchian-Tabrizi, and Kjetill S. Jakobsen (at right), and bioinformatician Åsmund Skjæveland (at left) from the University of Oslo’s Department of Biology have helped to reorganise the Tree of Life. They are pictured here with a Ginkgo biloba tree—one of the first true seed plants in existence. The Ginkgo biloba appeared approximately 270 million years ago and has almost not changed at all. The newly defined SAR group is much older. Photo: Ståle Skogstad

The discovery by Norwegian and Swiss researchers has gained attention from biologists worldwide. The findings came from one of the largest ever genetic comparison of higher life forms on the planet. Of thousands of potential genes examined, researchers identified 123 suitable genes found in all known groups of organisms; these common genes have been studied with more attention. The study has required long hours of work from the researchers and an enormous amount of computing resources—supplied mostly through a large network of computers in Switzerland and at the University of Oslo

“The results were pretty astounding. All non-bacterial life on Earth—called eukaryotic life— can now be divided into four main groups instead of the five groups that we have been working with up to now,” says Kamran Shalchian-Tabrizi , an associate professor from the University of Oslo’s Department of Biology who has also worked with Fabian Burki and Jan Pawlowski at the Department of Zoology and Animal Biology and the Department of Genetic Medicine and Development, at the University of Geneva, Switzerland.

The Tree of Life (see illustration) has, through the discovery that the two formerly separated branches share a similar evolutionary history, lost one of its branches, and this will both improve and simplify quite a bit of scientific work in the future. 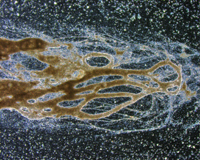 “Kinship says a lot about shared traits. Our findings can be important in many fields, such as in the study of the development of life and in the manufacture of new medicines” says Shalchian-Tabrizi in an interview with the University of Oslo’s research magazine Apollon.

“Our knowledge of organisms and the development of medicines are often based on comparative studies across species. It is, therefore, essential that we know the relationships between the largest groups in the great diversity of eukaryotes,” he adds.

The research group has, for example, found that brown algae and silica algae, and groups of single cell organisms like the malaria parasite, marine foraminifera, and the green sun animalcule (acanthocystis turfacea) actually belong to the same group. Previously, these species were thought to be completely unrelated.

“The work that we published in the August edition of PLoS ONE (a leading open access journal found on the internet) means that the description of the Tree of Life must be revised in new textbooks,” says Professor Kjetill S. Jakobsen from the University of Oslo’s Centre for Ecological and Evolutionary Synthesis (CEES). He is also a member of the Microbial Evolution Research Group (MERG), led by Shalchian-Tabrizi, at the Department of Biology.

MERG is one of 16 groups that the Faculty of Mathematics and Natural Sciences believes may have the potential to develop into new Centres of Excellence. 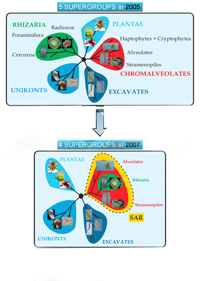 Eukaryotes
Eukaryotes are organisms with one or more cells that are characterised by cell components that do not appear in prokaryotes (bacteria and Archaea). The most important eukaryote cell components are the nucleus, membrane structures such as the endoplasmatic reticulum and golgi apparatus, cell walls, mitochondria and chloroplasts.

All life on Earth can be divided into two essentially different life forms—eukaryotes and prokaryotes. The eukaryotes gather their genetic material in a nucleus, while the prokaryotes (bacteria and archaea) have their genetic material floating freely in the cell. Eukaryotic organisms—such as humans—can, as a result of the new findings, be divided into the following four categories:

• SAR (the new main group, an abbreviation of Stramenophiles, Alveolates, and Rhizaria, the names of some of its members)

“The SAR group had to some extent been identified earlier, but we could not know if it was a correct observation because we lacked statistical data. To get that confidence, we first had to reconstruct the entire eukaryotic tree with the help of these 123 genes. Chromalveolates and rhizaria were clearly separated groups until we published our results,” says Shalchian-Tabrizi.

“However, to make this picture a little less clear, one branch of chromalveolates is still in no man’s land. It may be that these also belong to SAR, but we will require additional genes and genomes to study this. We have set our sights on doing that in the course of the next few years, as it is one of the numerous very interesting remaining challenges in the field” he adds.

“The Tree of Life tells the story of life on Earth, and our research can say something about how quickly life developed. Our discovery suggests that there may be were fewer big “events” than we have previously assumed in the development of higher life forms. The more we know about the branches on the Tree of Life, the more we can find out about life’s Big Bang, the beginning of life on Earth,” says Shalchian-Tabrizi.

Three billion years ago, there was only bacteria and Archaea. Eukaryotic life, which comprises all multi-celled organisms, developed in the sea—probably between 1.2 and 1.6 billion years ago. It was not before about 500 million years ago that the first creatures crept onto land.

“By digging down into the historical layers with the help of phylogenomic reconstruction, where we can find out about kinships between organisms at the genetic level and we can find answers to questions about how new traits developed. We are working, in a matter of speaking, with genetic archaeology. In this manner, we can also discover the reasons of the Earth’s biological diversity,” says Jakobsen.