Exactly 120 years ago, the first Norwegian doctoral dissertation in neuroscience was defended. It presented a revolutionary idea: that the brain consists of individual, separate nerve cells. The candidate’s name was Fridtjof Nansen. 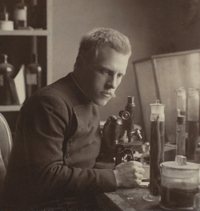 FRIDTJOF NANSEN at his desk in Bergen Museum. On the table are his precious microscope and a hagfish in a glass of formalin. At the age of 26, he earned a doctorate degree on the basis of a groundbreaking dissertation on the nervous system.
(Photo: Johan v.d. Fehr. Bergen University Library. The Image Collection).

We know that Fridtjof Nansen was an Arctic explorer and national hero, and that he received the Nobel Peace Prize. The fact that Nansen at the early age of 26 wrote himself into the history books as a brain scientist is probably less known.

Nansen’ career as a scientist starts in 1882 when he was appointed to the position of assistant curator at the Bergen Museum at the age of 21. His mentor was the renowned Gerhard Armauer Hansen who had discovered the bacterium that causes leprosy.

Even though the museum environment was inspiring, Nansen was dissatisfied with the equipment: He wanted a state-of-the-art microscope. He wrote to his father in Kristiania requesting a loan to buy a new one. It was to be the latest model Zeiss microscope, which cost six hundred kroner, equipped with one of the first oil-immersion lenses correcting spherical and chromatic aberrations, and it was as groundbreaking as the electron microscope, which came into use seventy years later.

The young Nansen knew how to make full use of his new microscope: He studied tissues, cells and the structure of the nervous system in several species of lower animals, including segmented worms, lancelets and hagfish.

At that time, microphotography had not yet been developed. In order to render what he saw in the microscope, Nansen took drawing lessons. The teacher was so impressed by his drawing skills that the claimed Nansen ought to choose a career in art rather than science.

In 1885, Nansen published a report from a study where he had used completely new methods: He had taught himself the technique of cutting thin sections, which was the basis for advanced microscopic investigation of tissues, and added a dye that made the structure of the nervous system visible under the microscope.

Nansen, however, wanted to go even further. He knew that the best method had been developed by the Italian anatomist (and later Nobel laureate) Camillo Golgi. Golgi stained microscopic slices of nerve tissue with silver nitrate and developed the tissue sections as one would develop a film. Nansen decided to travel to Golgi’s laboratory in Pavia to learn the technique directly from him.

During Nansen’s time there was major disagreement over how signals travel through the brain and the spinal cord. One of two competing notions was that the nerve cells with their long processes “coalesce” into a network of fine tubes through which fluid could flow: the so-called reticular theory. The other one was the neuron theory, which claimed that the nervous system consists of individual cells (neurons) with contact points (synapses) that serve to transmit signals.

After having been to Pavia and Naples to learn, Nansen continued his studies of invertebrate animals, ascidians and hagfish. In the summer of 1886, he published data that were the first to question the confluence of the fine branches of nerve cells. He continued his studies in Bergen, and in the following year, in December 1887, his dissertation “The Structure and Combination of the Histological Elements of the Central Nervous System” was published by the Bergen Museum. The thesis was defended in 1888, 120 years ago.

The dissertation runs over 214 pages and contains 113 illustrations. Nansen himself had drawn what he saw in the microscope directly on lithographic stone: The branching nerve processes interwove to form what was referred to as “the dotted substance”. His illustrations are of an outstanding quality.

Nansen claimed that the communication between the nerve cells ran through nerve endings forming contacts in this ”dotted substance”, and not through a network of directly fused tubes.

Thereby, Nansen became a strong promoter of the “Neuron Doctrine”, which prevails today. He was only 26 years old when he published his fundamental contribution to our understanding of the nervous system.

On 28 April 1888, Nansen defended his doctoral dissertation at the University of Kristiania. Four days later, he departed to meet the members of his expedition. Greenland was his next destination.

What Nansen could not se: the synapse

Fridtjof Nansen (1861 –1930) predicted the existence of the synaptic cleft – the gap between the processes of two nerve cells – which we now know to be the point of signal transmission. This gap is only 20 millionths of a millimetre wide, and too small to be visible in an ordinary microscope. Its structure could be confirmed only in the 1950s following the advent of the electron microscope. Nerve signals are transmitted with the aid of signal substances through a highly regulated electrochemical mechanism, which is still subject to research. Nansen correctly interpreted his observations, and was far from modest: He wrote that “the dotted substance” (where we now know that the synapses are) had to be “a principal seat of the nervous activity ... probably the principal seat of intelligence.” He was right, although strictly speaking, it could not be scientifically documented – 120 years ago.