A unique archaeological discovery in the Balkans: Archaeologists from the University of Oslo have just found the first Illyrian trading post of all time. So Balkan history must now be rewritten!

IMPORTANT DISCOVERY: - Our discovery is important for understanding cultural identities in the Balkans in ancient times,”, says Marina Prusac at University of Oslo. Photo: University of Mostar

There is jubilation at the Museum of Cultural History at the University of Oslo i Norway. Marina Prusac , Associate Professor in the department of archaeology, has just returned home after conducting excavations in the border area between Croatia and Bosnia-Herzegovina. In the course of several weeks of intense digging this autumn, her archaeological team found the very first traces of an Illyrian trading post that is more han two thousand years old.

The Illyrians were an ancient people who lived by hunting, fishing and agriculture. They were known as warriors and pirates. Not only did they fight Greek colonists and Roman occupants, the various tribes also feuded among themselves. However, the archaeological finds show that the Illyrians also had peaceful trade connections with the Romans.

“The find is unique in a European perspective. We have concluded that Desilo, was the place is called, was an important trading post of great significance for contact between the Illyrians and the Romans,” Marina Prusac tells the research magazine Apollon.

Surprisingly large finds have been made in a short period of time. The archaeologists have discovered the ruins of a settlement, the remains of a harbour that probably functioned as a trading post, as well as many sunken boats, fully-laden with wine pitchers – so-called amphorae – from the first century B.C.

The archaeologist Adam Lindhagen , who has a PhD from the University of Lund and has specialised in Roman wine amphorae, says that this is the most important find of all time from the Illyrian areas.

“There is much to suggest that far more is hidden in the mud. We’ve only scraped the surface so far,” he points out.

It all started in spring 2007 when Professor Snjezana Vasilj of the University of Mostar found 16 Illyrian boats in Desilo, fully-laden with Roman wine amphorae. The find was speedily interpreted as proof that the Illyrians were pirates and that the ships had been sunk by the Romans. Although the pirate theory received considerable attention from the press in many parts of Europe, Marina Prusac and Adam Lindhagen did not believe this interpretation.

“There certainly were pirate activities along the coast, but we thought it rather odd that the pirates were so far inland and so near the important Roman colony of Narona. In our opinion Desilo might have been a trading centre.” 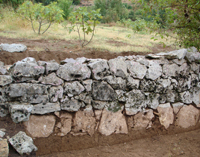 MOORING HOLES: When the archaeologists dug out a 20-metre long quay wall, they found a number of mooring holes. The holes had been made with an extra groove, presumably to accommodate an iron ring for mooring boats. Photo: Marina Prusac

Desilo is located 20 kilometres from the coast on an alluvial plain by the River Neretva. The river is the only traffic artery along the entire Croatian coast that runs into the Balkan mountains. It is broad and free-flowing for the first 30 kilometres or so, after which its course becomes narrow.

Near Desilo there are also ancient traffic arteries on land in the direction of both Narona, which was first a Greek trading post and then a Roman colony, and the Illyrian settlement of “Daorson” – the present-day Osanic.

“Desilo is situated at the innermost point of a quiet bay where it was natural to transfer goods to smaller boats, so the place is perfect for an inner trading harbour. We knew that if we found a harbour it would represent a rare example of a meeting point in this impenetrable landscape. And we found it!” a delighted Ms Prusac tells us.

Over the past two thousand years the river has repeatedly changed its bed in the delta. The archaeologists found the remains of the Illyrian trading post under several metres of mud and ooze when the land-owner put his excavator at their disposal. It appears that parts of the wall that stuck up from the mud by the water’s edge may have functioned as one of the many quays at the trading post. The wall is 20 metres long and 60 centimetres wide, and is built as a polygonal structure. 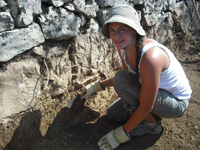 “The wall was solid and stable. The other side was not so well constructed and most likely functioned as a dam. There were a number of mooring holes placed at the same height on the wall, almost like a horizontal band.”

And as if this was not enough, the archaeologists from the University of Oslo also discovered that there were at least twice as many boats as those that had already been registered. The boats, which the Romans called Lembi, were well known for their fast manoeuvrability.

The many pieces of pottery found indicate that this was a major trading post. And last but not least: about a hundred metres from the harbour site they found an Illyrian settlement. Moreover, in collaboration with the land-owner and along with master’s degree student Jo-Simon Frøshaug Stokke, the recently graduated archaeologists Lene Os Johannessen and Ole Christian Aslaksen discovered terrace formations in the mountainside.

“This find can only be interpreted as indicating the presence of a settlement that presumably existed for several hundred years or even longer before the trade between the Illyrians and the Romans started.”

Some graves – older than the other finds – were previously discovered close to the settlement. A number of individual finds have also been made in the area: anchor parts, lance tips and fibula, and metal buckles for fastening clothes.

“Thanks to the clay and the fresh water the objects are surprisingly well preserved. Salt water would have destroyed the wood.” 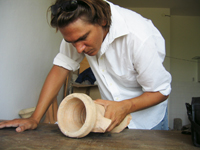 WINE PITCHER TEST: Archaeologist Adam Lindhagen analyzed the amphorae to find out where they came from. Photo: Marina Prusac

On the sea bed, together with the boats, archaeologists from Moster found hundreds of pieces of wine amphorae and as many as 700 lids from these pitchers.

“Imports from the Roman colony Narona must therefore have been far more extensive than we previously thought,” Adam Lindhagen points out.

He has analyzed the pottery to find out where the amphorae came from. He can now say that they were exclusively produced along the Dalmatian coast – from where wine was exported to the entire Roman Empire.

“In exchange for wine the Romans may have bought salt, metal, leather and slaves. The price could have been the same as in the north. According to Julius Caesar (100-44 B.C.), the Gauls were happy to swap a slave for a 25-litre amphora of wine.”

While Professor Vasilj was of the view that all the boats were sunk at the same time in a Roman campaign against Illyrian pirates, the Norwegian archaeologists have found indications that the boats were sunk over a period of almost a hundred years. Their evidence is based on the dating of the wine amphorae.

One of the big questions is why none of the amphorae are whole. They are all in fragments.

“We don’t know why the boats were sunk and the pitchers destroyed. It’s absurd to think that the Romans sank almost a thousand amphorae containing their own wine. The amphorae may have been dumped when they’d been emptied. But animal bones, horse teeth, Illyrian pottery and weapons like axes and spear tips have also been found in the sea. So it’s possible that they made ritual offerings to the sea – a well-known phenomenon in Scandinavia during the Iron Age. If we can confirm that this is the case, then this is the first example we have heard of from the Illyrian area.”

Archaeological research on the Illyrians was used politically as the culture-historical glue of the various groups in the former Yugoslavia. Today the focus is more on the differences between the Illyrian peoples.

“The neutral term ‘Illyrian’ was applied to all ethnic groups in the former Yugoslavia. The Illyrians have been described as warriors, and little focus has been placed on peaceful connections between the Illyrians and the Romans. So it’s important to be able to reveal peaceful relations and to show that the Illyrians had come a long way in their cultural contact with other nations, at the same time as there were great differences between the Illyrian tribes. Our discovery is therefore important for understanding cultural identities in the Balkans in ancient times,” Marina Prusac tells us.