Contrary to popular belief, the British did not 'borrow' words and concepts from the Norwegian and Danish Vikings and their descendants. What we call English is actually a form of Scandinavian. 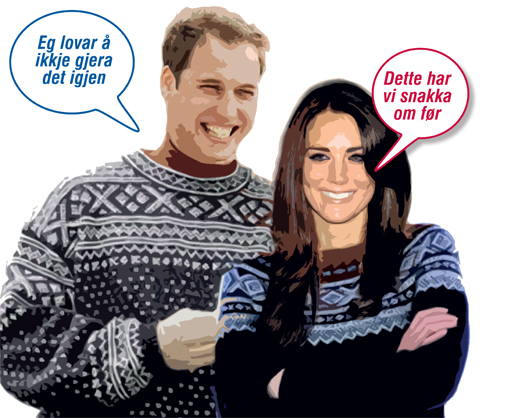 The sentence structure in Middle English - and thus also Modern English - is Scandinavian and not Western Germanic, according to professor Jan Terje Faarlund. (Illustration: Hanne Utigard)

"Have you considered how easy it is for us Norwegians to learn English?" asks Jan Terje Faarlund, professor of linguistics at the University of Oslo. "Obviously there are many English words that resemble ours. But there is something more: its fundamental structure is strikingly similar to Norwegian. We avoid many of the usual mistakes because the grammar is more or less the same.

Faarlund and his colleague Joseph Emmonds, visiting professor from Palacký University in the Czech Republic, now believe they can prove that English is in reality a Scandinavian language, in other words it belongs to the Northern Germanic language group, just like Norwegian, Danish, Swedish, Icelandic and Faroese. This is totally new and breaks with what other language researchers and the rest of the world believe, namely that English descends directly from Old English. Old English, or Anglo-Saxon, is a West Germanic language, which the Angles and Saxons brought with them from Northern Germany and Southern Jylland when they settled in the British Isles in the fifth century.

"Modern English is a direct descendant of the language of Scandinavians who settled in the British Isles in the course of many centuries, before the French-speaking Normans conquered the country in 1066," says Faarlund. He points out that Old English and Modern English are two very different languages. Why?

"We believe it is because Old English quite simply died out while Scandinavian survived, albeit strongly influenced of course by Old English," he says.

The 'cohabitation' between the British and the Scandinavians was largely hostile. Both fought for political hegemony. The descendants of the Vikings gained control of the eastern and northern parts of the country. The Danelaw was under the control of Scandinavian chiefs for half a century.

Like most colonists, the Scandinavian-speaking inhabitants found no reason to switch to the language of the country they had arrived in.
"One especially important, geographic point in our study is that the East Midlands region, where the spoken language later developed into Modern English, coincides almost exactly with the densely populated, southern part of the Danelaw," says the professor.

The language changed a great deal in the period after the Normans arrived. The miserable conditions people lived in at the time resulted in a complete merger of the two previously separate groups of people – the Old English speakers and the Scandinavian speakers - and out of this came Middle English - the predecessor of Modern English.

Adopted words they already had

The language adopted many words from the Danelaw's inhabitants who were of Norwegian and Danish descent. For example, all the lexical words in this sentence are Scandinavian: He took the knife and cut the steak. Only he, the and and come from Old English.

"What is particularly interesting is that Old English adopted words for day-to-day things that were already in the language. Usually one borrows words and concepts for new things. In English almost the reverse is true – the day-to-day words are Scandinavian, and there are many of them," says Faarlund.

The researchers believe that Old English already had 90 per cent of these concepts in its own vocabulary.

Took over the grammar

But the Scandinavian element was not limited to the vocabulary, which is normal when languages come into contact with each other. Even though a massive number of new words are on their way into a language, it nevertheless retains its own grammar. This is almost a universal law.
"But in England grammatical words and morphemes - in other words the smallest abstract, meaningful linguistic unit - were also adopted from Scandinavian and survive in English to this day."

The two researchers show that the sentence structure in Middle English - and thus also Modern English - is Scandinavian and not Western Germanic.
"It is highly irregular to borrow the syntax and structure from one language and use it in another language. In our days the Norwegians are borrowing words from English, and many people are concerned about this. However, the Norwegian word structure is totally unaffected by English. It remains the same. The same goes for the structure in English: it is virtually unaffected by Old English."

"How can you illustrate this?"

"We can show that wherever English differs syntactically from the other Western Germanic languages - German, Dutch, Frisian – it has the same structure as the Scandinavian languages." Here are some examples:

* Word order: In English and Scandinavian the object is placed after the verb:
I have read the book.
Eg har lese boka.
German and Dutch (and Old English) put the verb at the end.
Ich habe das Buch gelesen.

* English and Scandinavian can have a preposition at the end of the sentence.
This we have talked about.
Dette har vi snakka om.

* English and Scandinavian can have a split infinitive, i.e. we can insert a word between the infinitive marker and the verb.
I promise to never do it again.
Eg lovar å ikkje gjera det igjen.

"All of this is impossible in German or Dutch, and these kinds of structures are very unlikely to change within a language. The only reasonable explanation then is that English is in fact a Scandinavian language, and a continuation of the Norwegian-Danish language which was used in England during the Middle Ages."

"But why the inhabitants of the British Isles chose the Scandinavian grammar is something we can only speculate on," says Jan Terje Faarlund.