The universe abounds with dark matter. Nobody knows what it consists of. UiO physicists have now launched a very hard mathematical explanation that could solve the mystery once and for all. 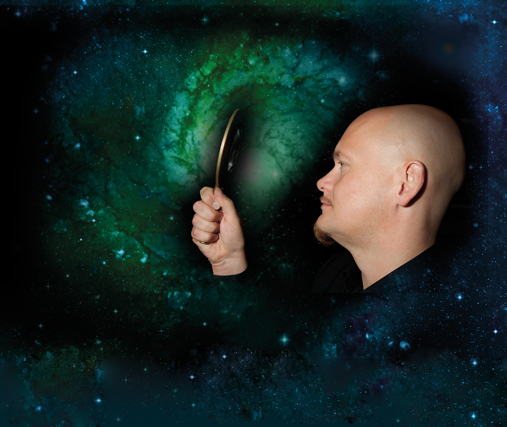 LOOKING FOR DARK MATTER: Are Raklev, the university's leading theoretician in astroparticle physics, has launched a mathematical model that explains what dark matter may consist of.  Photo: Yngve Vogt

Astrophysicists have known for the last 80 years that most of the universe consists of an unknown, dark matter. The solution to the mystery may now be just around the corner.

"We are looking for a new member of our particle zoo in order to explain dark matter. We know that it is a very exotic beast. And we have found a plausible explanation," reports Are Raklev, an associate professor in particle physics in the University of Oslo's Department of Physics. He is the university's leading theorist in astroparticle physics and has launched a model that explains what dark matter may consist of and how one can discover the invisible particles experimentally.

Even though dark matter is invisible, astrophysicists know it exists. Without this dark matter it is impossible to explain how the visible things in the universe hang together.

The world famous, Swiss physicist Fritz Zwicky was speculating on what dark matter might be as early as the 1930s.

Astrophysicists have calculated that 80 per cent of all the mass in the universe is dark, invisible matter. Thanks to gravity this dark matter clumps together as ordinary matter.

Dark matter can explain why stars move like they do. Dark matter may also explain the rotation speed of galaxies.

"Even though we can calculate how much dark matter there is in the universe, we still know little about what dark matter is. The particles in dark matter must either have a lot of mass, or there must be very many of them. Neutrinos meet all the requirements of dark matter. But there is one big difficulty. They have far too little mass."

Are Raklev is now trying to prove that dark matter consists of gravitinos. This is a particle that has been unfairly treated for years.

And just what are gravitinos? Hold tight: gravitinos are the supersymmetric partner of gravitons.

Or, to be even more precise:

In order to dig deeper into why Raklev believes dark matter consists of gravitinos, and have any chance at all of understanding the theory behind gravitinos, Apollon has to take a couple of steps back:

SIGNS OF DARK MATTER: The image shows all the gamma rays recorded by the Fermi-LAT space probe as a map of the entire universe. The red band through the middle of the image is radiation from our own galaxy. The centre of the galaxy is almost at the centre of the image.  "It is here that a small surplus of gamma rays has been seen that one cannot immediately explain by the radiation one expects from ordinary matter. The observations may fit our dark matter models. This surplus of gamma rays is not visible to the eye, but can be found by a time consuming analysis of the data," says Are Raklev, who reminds us that the analysis is still a little uncertain.

Physicists want to find out whether or not nature is supersymmetric. Supersymmetry means that there is a symmetry between matter and forces. For each type of electron and quark there is a corresponding heavy, supersymmetric partner. The supersymmetric particles were created in the instant after the Big Bang. If some of them have survived to today, they may be what dark matter is made of.

The supersymmetric partner of the gravitino is, as Apollon said, the graviton.

"A graviton is the particle we believe mediates gravitational force, just like a photon, the light particle, mediates electromagnetic force. While gravitons do not weigh anything at all, gravitinos may weigh a great deal. If nature is supersymmetric and gravitons exist, then gravitinos also exist. And vice versa. This is pure mathematics."

But there is a small but. Physicists cannot demonstrate the relationship between gravitons and gravitinos before they have managed to unify all the forces of nature.

Step 2: The forces of nature

In the 1970s, electromagnetism was unified with the strong and weak nuclear forces in what physicists call the standard model.

The fourth force of nature is gravity. Even though it is unbelievably painful to fall down stairs, gravity is the weakest of the four forces of nature.

The problem is that physicists have not yet been able to unify gravity with the three other forces of nature. The day physicists gain a unified understanding of all four forces of nature, they will gain a unique understanding of the world. This will make it possible to describe all imaginable interactions between all possible particles in nature. Physicists call this the ToE Theory (Theory of Everything).

"In order to unify gravitational force with the other three forces of nature we have to understand gravity as quantum theory. This means we need a theory in which the particle graviton is included in the atomic nucleus."

Researchers are now looking for signs of both supersymmetry and the ToE Theory. Discovering the graviton would be an enormous step in this direction.

As the reader may have understood, it is very difficult to research dark matter. This is because dark matter has no electromagnetic relationships to terrestrial particles at all. One example of dark matter is the aforementioned neutrino. Unfortunately, neutrinos make up only an imperceptibly tiny part of dark matter.

Even though it has not been possible to observe dark matter, several billion neutrinos race through your body every second. However, their speed is somewhat limited. The particles move just as slowly as the speed the solar system moves around the galaxy. In other words, a mere 400 kilometres a second.

"When there are no electromagnetic relationships with visible particles, the particles can pass right through us without any measuring instruments detecting them. This is where supersymmetry comes in. If supersymmetry is right, physicists can explain why there is dark matter in the universe. That is what is fun about my job," laughs Raklev.

He is now asserting that dark matter mostly consists of gravitinos.

"Supersymmetry simplifies everything. If the ToE Theory exists, in other words if it is possible to unify the four forces of nature, gravitinos must exist."

The gravitinos were formed right after the Big Bang.

Physicists have up to now viewed gravitinos as a problem. They have believed that the theory of supersymmetry does not work because there are too many gravitinos.

In the old models dark matter was always everlasting. This meant that gravitinos were a bothersome part of the supersymmetry model. In Raklev's new model, their life span is no longer endless. Nonetheless, the average life span of gravitinos is very long and actually longer than the life span of the universe.

However, there is a big difference between an unending life span and a life span of more than 15 billion years. With limited a life span, gravitinos must be converted into other particles. It is precisely this conversion effect that can be measured. And the conversion explains the model.

"We believe that almost all dark matter is gravitinos. The explanation lies in very hard mathematics. We are developing special models that calculate the consequences of these theories and we predict how the particles can be observed in experiments."

The measurements are underway

Researchers are now trying to test this experimentally and explain why these new particles have not yet been seen in the CERN experiments in Geneva in Switzerland.

"On the other hand, it should theoretically possible to observe them from a space probe."

The simplest way of observing gravitinos could be studying what happens if two particles collide out in the universe and are converted into other particles such as photons or antimatter.

Even though the collisions occur very rarely, there is still so much dark matter in the universe that a significant number of photons should be able to be produced.

The big problem is that gravitinos do not collide.

"At least it happens so rarely that we could never hope to observe it."

Nonetheless there is hope

"Luckily for us, gravitinos are not one hundred per cent stable. They are converted into something else at some point. We can predict what the signal looks like after gravitinos have been converted. The conversion will send out a small electromagnetic wave. This is also called a gamma ray."

"So far we have only seen noise. But one of the research groups claim they have observed a small, suspicious surplus of gamma rays from the centre of our galaxy. Their observations may fit our models," says the man behind the very difficult mathematical model for dark matter, associate professor in theoretical particle physics, Are Raklev.

• 80 per cent of all mass in the universe is dark, invisible matter.

• Nobody knows what dark matter consists of. A mathematical model at UiO indicates that dark matter make consist of gravitinos, which is a very exotic beast in the particle zoo.

• There are four forces of nature: Electromagnetism, the strong and the weak nuclear force, and gravity.