Particle physicists have developed a new medical technology that combines PET and MRI in one. Benefit: Improved image quality and less radiation. 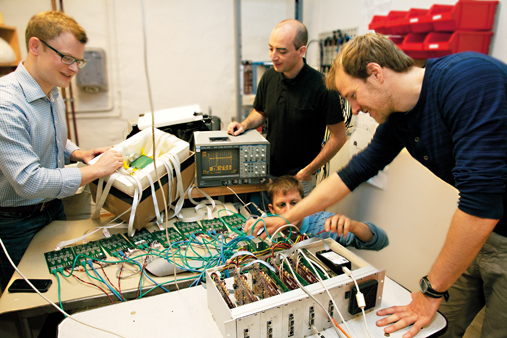 FIFTY PER CENT LESS RADIATION:  The particle physicists Erlend Bolle, David Volgyes, Michael Rissi and Kim-Eigard Hines have developed a completely new technology that makes it possible to halve radiation from a PET scanner. The PET scanner is also built at such a small scale that it can be placed inside an MR scanner. This makes it possible to take the MR and PET images at the same time. Photo: Yngve Vogt

Current cancer examinations involve high levels of radiation. Based on the Big Bang research in CERN, particle physicists at University in Oslo have created a brand new technology that combines the PET and MR medical imaging technologies. This combination involves much less radiation than current technology.

PET is an abbreviation of Positron emission tomography and it provides a spatial image of where the cancer cells are located in the body. PET scans are harder to interpret if medical staff cannot situate the location of cancer cells in relation to the skeleton and soft tissue. This can be done by comparing PET images with an anatomical picture such as CT (computerised tomography) or MR (magnetic resonance) scans.

CT scans provide a three-dimensional x-ray image of the body. MR scans photograph the body using radio waves and a powerful magnetic field. MR provides far better images of soft tissue than CT does. The drawback of MR scans is that the examination is more expensive and takes much longer. The advantage is that MR does not emit ionising radiation.

Currently, most hospitals combine PET and CT, but this combination has a significant weakness.

'The radiation from such an examination is ten times higher than the average background radiation over the course of a year. Many cancer patients must be examined multiple times to test whether the treatment is working. The total radiation during treatment can therefore be very high', says Erlend Bolle, a researcher in particle physics in the Department of Physics at University of Oslo (UiO), Norway.

Today, there are two types of PET technologies, each adapted to a particular use: One is adapted for clinical examinations of patients. The other technology is optimised to let researchers find new and better cancer treatments by testing new medicines on animals. Siemens and Philips have recently launched a new PET/MR combination for patients. Particle physicists at UiO are the first in the world to develop a specially adapted PET/MR solution for scans of animals.

'The high resolution in our PET scanner provides better images, and the high sensitivity makes it possible to use only half as much radioactivity in the examinations without it affecting the image quality. This opens new possibilities in research, and may also contribute to reducing radiation in clinical scanners, especially within mammography and brain scans. We therefore hope that Philips and Siemens find our technology interesting', says Bolle.

Together with his three colleagues, he has constructed a PET machine that is so small that it can be placed inside an MR machine. Both images can therefore be taken at the same time, and medical personnel do not have to correct the errors that occur when two images are combined after they have been taken.

Eats up all the photons

In a standard PET examination, radioactive isotopes are attached to sugar molecules and injected into the body. The PET image is taken one hour later, when the sugar has been distributed to the entire body. Cancer cells burn sugar quicker than healthy cells. Radioactive gamma particles therefore accumulate in cancer cells. The gamma particles send out two sets of photons in opposite directions. This is called parallel photons.

In order to trace the radioactive source, the PET scanner must find which parallel photons are linked. This is one of the great challenges for current PET scanners.

Only half of the photons deposit all their energy on first impact. On subsequent impacts, only some of the energy is deposited before the photons change direction and deposit the rest of the energy elsewhere. Current detectors have no depth information and therefore cannot reconstruct the positions of these photons.

'In order to capture all the photons, we measure the position in three dimensions in a five-layer detector', Bolle says.

'When there are large openings on both sides of the scanner, too many photons go astray. This diminishes the image quality. The closer the patient is to the detector, the higher the sensitivity of the image.'

In the new UiO PET scanner, good image quality can be achieved even if the test animal is lying right next to the detectors.

'We have managed to double the sensitivity. In practice, we can take the pictures twice as fast, or only use half of the radioactive dose in order to get the same image quality as previously.'

The new detectors are made from entirely new crystals and light guides. In each of the five layers of the detectors, crystal pins are placed on top of a transverse layer of light guide fibres.

'This is a completely new way of measuring gamma particles.

The detectors are placed so that the space within the new scanner is square.'

'Today, the scanners form a circle. This means that there is a gap between each detector block, and photons disappear through the gaps. Now, we have full coverage of crystals on all sides. We can capture several million particles a second. However, this does not happen at regular intervals. We measure each nanosecond. If we do not measure fast enough, we can get errors.'

All the parts of the PET scanner are put together like lego bricks. The system digitalises the data at an earlier stage than the current PET solutions. The data can be sent to any number of computers. The image processing takes place in parallel with the examination.

'Though we are making a scanner for animals, it can easily be rebuilt for hospital use', Bolle notes. He got the idea from the large Big Bang experiment in CERN, in which enormous detectors in the world's largest physics experiment are to trace the world's smallest particles. The research is funded by the Research Council of Norway and the Swiss National Science Foundation.

PET
(positron emission tomography) provides a spatial image of where the cancer cells are located in the body.