New insight into the behaviour of atomic nuclei may explain how gigantic star explosions, or supernovas, have formed the elements that are crucial to mankind. 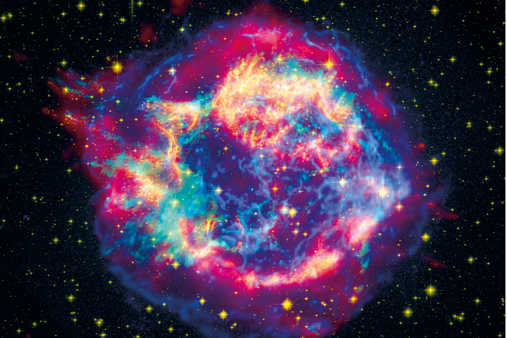 SUPERNOVA EXPLOSION: Today astrophysicists are struggling to perform computer simulations of a supernova (a massive star explosion). New knowledge about atomic nuclei from the University of Oslo may make such simulations easier. Photo: NASA

Ground-breaking research in nuclear physics at the University of Oslo may help astrophysicists understand how the heavier elements in our universe were made.

The Big Bang only produced the lightest elements, such as hydrogen and helium. One of the fundamental questions of astrophysics is how all the other elements were formed. In 1957, American researchers concluded that elements were formed through nuclear reactions inside stars.

Astrophysicists have believed that half the elements which are heavier than iron were formed in gigantic star explosions, known as supernovas. However, there is one little snag with this theory:

Astrophysicists have huge problems to make computer simulations of a supernova.

"A supernova is extremely complicated. Astrophysicists have not yet managed to make realistic computer simulations of supernova explosions,” says nuclear physicist Ann-Cecilie Larsen at the SAFE-Centre for Accelerator-based Research and Energy Physics at the University of Oslo.

The simulations are based on certain characteristics of the atomic nucleus that are taken for granted but which have never been tested, as these characteristics are hard to determine.

Now, experiments carried out at the University of Oslo show that astrophysicists are using the wrong data in their models. No one has ever carried out these experiments before. The new results may have a great impact.

“Calculations show that it will be 200 to 300 times easier to achieve specific nuclear reactions in a supernova with our data," Larsen says. 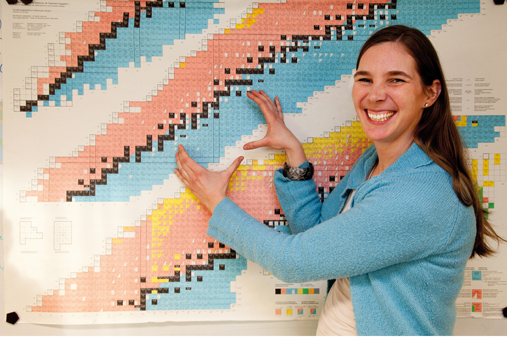 SIMPLIFYING THE SUPERNOVA:  "Our recent calculations show that it could be 200 to 300 times easier to achieve specific nuclear reactions in a supernova," says Ann-Cecilie Larsen. Photo: Yngve Vogt

In order to understand this discovery, we must take a few steps back.

"In earlier times we thought the Sun was fuelled by coal. However, when we came to understand how old the solar system actually was, we realized there wasn’t enough coal to fuel the Sun. Instead, the production of heat was explained by fusion, in other words melting nuclei together."

The Sun consists of approximately 75 per cent hydrogen, 23 per cent helium and a small portion of heavier elements. Pairs of hydrogen atoms fuse into helium atoms when the temperature and the pressure are so high that they exceed the electromagnetic forces that push the atoms apart. This is what happens at the centre of the Sun, where temperatures reach 15 million degrees Celsius.

"Imagine the Sun as an onion with multiple layers. The heaviest element is formed at the core, whereas the outer layers have lighter elements.”

When the Sun expires, the core of the Sun will be transformed into neon. In a really heavy star, the core will have turned into iron. Then it will be over. A dying star will never be able to form heavier elements than iron. And the explanation is surprisingly simple.

"Stars do not gain energy by burning heavier atomic nuclei. This has to do with the nuclear binding energy."

In nuclear physics, energy can be released by fusing small atomic nuclei. This process is called fusion.

When the elements are heavier than iron, it is only possible to extract energy from nuclear reactions by splitting the atomic nucleus. This process is called fission, which we know from nuclear power plants.

In order for a dying star to end up as a supernova, its core must have been transformed into iron.

"Once the core cannot be compressed any further, the compressed matter must expand again in a gigantic explosion, or supernova. This is where the heavy elements of the universe may have been formed.”

Nuclear physicists at the University of Oslo have measured the energy states of the elements iron and molybdenum. The results of these experiments could change our understanding of supernova explosions. All the experiments were conducted in the cyclotron laboratory at UiO, where nuclear physicists can measure what happens when atomic nuclei collide with each other at very high speeds.

The protons and neutrons are put very tightly together and orbit inside the nucleus itself. Protons are positively charged particles. Neutrons are not charged.

In one of the experiments the nuclear physicists shoot at a target consisting of iron, with helium ions. When a huge amount of energy is given to the iron nuclei, the protons and neutrons of the iron core are pushed into a new orbit. In the second experiment, helium is shot at molybdenum.

"The atomic nuclei become highly excited and emit electromagnetic radiation. This radiation can be measured. The characteristics of the atomic nucleus appear to be different to what was previously thought."

"Our experiments show a strong probability that the atomic nucleus releases small amounts of energy. It has been widely believed that this had little effect on the formation of elements in supernovae. We were surprised. The dynamics of the element production could be very different. All the atomic nuclei are connected in a network. If the nucleus of an atom changes its characteristics, this may change the entire pattern governing the formation of other elements." 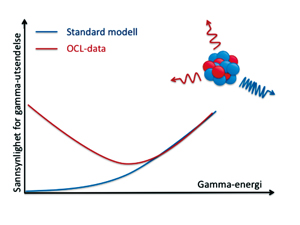 LOW-ENERGY: The blue curve shows the generally accepted standard model for how the nucleus of an atom emits energy. The red curve shows the results from the University of Oslo. It turns out that the atomic nucleus emits far more low-energy radiation than previously thought. Examples of low-energy and high-energy radiation of an atom are at the top right-hand corner. Blue light has a higher frequency than red light. In other words, blue light has more energy than red light. The UiO experiments show that some atomic nuclei produce greater quantities of red light than previously thought.

One of the problems with simulations is that no one knows what happens when nuclear reactions move beyond the well-known nuclei and out to the very exotic ones, that are not found in nature.

When it gets really hot, such as inside a star or a supernova, neutrons may be released and fuse with other atoms. When one of the neutrons of an atom emits an electron, the neutron turns into a proton. Then the atom has been transformed into a heavier element.

Nuclear physicists can calculate the probability of a physical transition between different elements. The known isotopes have been measured in laboratories. However, there are many isotopes which have not been measured. The limits are unknown.

"We do not know what happens when nuclear reactions in supernova explosions move beyond the table of isotopes. In a matter of seconds, many exotic atoms are formed that do not exist on Earth and which quickly transform into stable elements. Since we have no data on these exotic nuclei, the astrophysicists have to make many assumptions about their properties.”

In a supernova explosion you need a large enough number of neutrons available. At the moment there seems to be more protons than neutrons in a supernova.

"In order to get the necessary reactions in a supernova, we must have neutron-rich nuclei."

This is precisely where Larsen's research comes in. As long as the supernova has a sufficient amount of neutrons, astrophysicists can, with the help of the new findings from the University of Oslo, produce better simulations of the formation of elements in supernovae.