A simple method has been found that tells people who have become seriously ill after a tick bite once and for all whether they have bacteria in their blood. 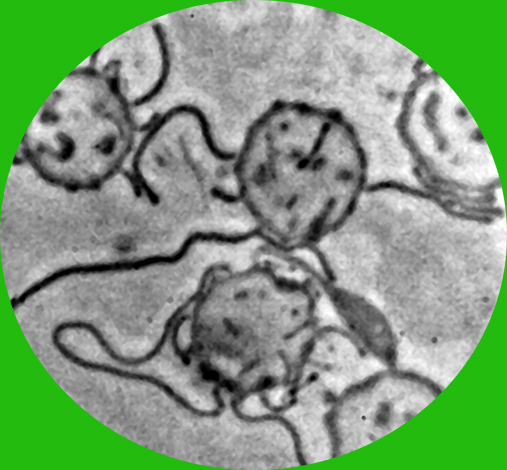 LARS MONSEN'S blood: Among the many sick people who have come to the two biologists at Blindern with samples of their blood is Lars Monsen. His blood is among the most contaminated the researchers have seen. It is full of bacteria and other contaminants. The Norwegian wilderness expert and expedition leader has a severe infection which is partly due to Borrelia. (PHOTO: Morten Laane)

Over the past year, two experienced biologists at Oslo University have seen something that very few scientists experience. They have been sought out by a persistent stream of people from all over Norway who are asking for help.

"People so sick that they can barely stand up have come here to Kristine Bonnevie Building at the University's Blindern campus. They are desperate, because they have not been diagnosal, and therefore have not received appropriate treatment.

Many of them suspect that they have developed chronic borreliosis following a tick bite, and that they have had the disease for a long time. But the tests used by the public health service do not detect it. They come to us with blood samples that they want us to test. They have heard rumours that we have developed a method that can give them answers", explain Ivar Mysterud and Morten Laane. The remarkable new method has just been published in the journal Biological and Biomedical Reports.

When the body is attacked by a bacterium, antibodies develop that can be detected in blood samples and in spinal fluid.

"If the tests do not show that the body has developed antibodies against Borrelia bacteria, this is taken as evidence that tick bite is not the cause of the patients' symptoms”.

"We believe, contrary to the official stance, that the antibody reaction wanes in people who have been sick for a long time, and that only a small minority of those with chronic borreliosis test positive. The Borrelia infection suppresses the immune system so that it does not function properly. This is one of several reasons that it is difficult to give a definite diagnosis.

The tests used today succeed only partly in detecting the disease due to tick bite. Through intensive studies over many years, the two biologists have formed a picture of the life cycle of the Borrelia bacterium and all the different forms that it takes. Borrelia is a thread-like, spiral bacterium, or spirochaete. It can bore into our blood cells and moves around the body with our blood circulation.

"As a result, the bacteria spread rapidly and in principle can infect all tissues and organs, including the brain. This is why the symptoms are so many and varied. In the early phase, the symptoms tend to be mild, such as headache, muscular pain and fever. In some cases, however, the disease may last a long time, or become chronic, and the symptoms may vary enormously: stabbing pains, impairments in short-term memory, persistent fatigue, unusually long recovery time after exertion, permanent skin changes, joint pain, paralysis, nervous disorders and depression. One important reason that chronic borreliosis often remains undiagnosed is that the symptoms are not well understood. The diagnosis chronic borreliosis is controversial. The Norwegian health service believes that a four-week course of antibiotics should be enough to kill all Borrelia bacteria in the body, but it is not that simple, according to the two biologists.

"There are strong indications that once the bacterium gets into your bloodstream, it's there for the rest of your life", they say.

CONCEALED HEALTH THREAT: "We know that Borrelia can infect any part of the body. If the blood tests used by the public health service do not detect the bacteria effectively, it makes one wonder how many people have had their lives destroyed by a single blood transfusion. Borrelia is closely related to the deadly bacterium which causes syphilis, and we cannot exclude the possibility that Borrelia is also transmitted by sexual intercourse", acknowledge Morten Laane and Ivar Mysterud. (PHOTO: Ola Sæther)

The two scientists are pretty much alone in what they are doing: investigating samples of living blood under the microscope - over time. They have looked at the blood of a large number of people who suspect that they are chronically ill following a tick bite.

"We study the behaviour of the bacteria directly through the microscope. We have taken thousands of pictures, and we film their movement pattern in real time or with a time lapse. This allows us to see how the bacteria enter and leave the blood cells and swim around in the blood plasma. These are powerful methods, but nobody uses them any longer", says Laane. He himself is regarded as one of the foremost microscopy experts, and he has been studying bacteria for over 50 years.

Laane and Mysterud have experienced how difficult it is to detect the bacteria in the blood. They differ widely in shape and appearance, and they are good at camouflage. As soon as the highly motile and active bacteria experience a deterioration in their living conditions, they form cysts, which are the dormant stage of the life cycle. Bacteria may also aggregate in colonies in a slime called a biofilm. This protects them from external threats such as antibiotics, disinfectants and the body's own immune system. When the environment is favourable once more, the Borrelia bacteria revert to their usual spiral form. Both cysts and individual structures may germinate and produce new spirochaetes when living conditions are favourable.

"Because the bacteria go through many stages in their life cycle, as cysts, "pearls" and various thread forms, it is easy to confuse them with parts of disintegrating cells or with other bacteria. Moreover, Borrelia bacteria are gram negative, i.e. they have thin cell walls and are therefore difficult to stain. This also makes them difficult to detect in cells and tissue.

When, for example, a blood preparation is made at a clinic, the bacterial culture is smeared on a slide and dried. Light refraction is then identical inside and outside the bacteria, not making them visible. Often there are only a few bacteria in each preparation, and they are therefore easy to overlook.

By developing some smart microscopy techniques, researchers have now succeeded in making the Borrelia bacteria stand out clearly - including in the blood of individuals who have no symptoms of disease.

"Using our method, the Borrelia bacteria in the red blood cells stand out clearly after one to two days at room temperature. We manage to make the bacteria visible without using staining  (which can only be used on dead preparations). Keeping the bacteria alive allows us to monitor the bacteria through the microscope.

The researchers add a dilute saline solution to the blood preparation. The blood cell then swells up and most of the blood plasma breaks up and disappears.

"The swollen red blood cells become clearly visible. The images are sharper and clearer than those produced by other methods we know of, and they often show incredible details. We can observe how the bacteria emerge from the blood cells. Not all of the structures seen when the blood cells expel material are classically shaped Borrelia bacteria. Visualization of various Borrelia life stages can be enhanced by adjusting the concentration of the salt solution to give more detail.

A common conception is that Borrelia bacteria in human blood have a spiral or zig-zag shape. However, the absence of such shapes in the blood does not exclude the presence of the bacteria. The researchers see examples of the bacteria straightening out after 24 hours, or they may exist as tiny structures with simple geometrical shapes, or form round structures (the aforementioned cyst stage).

"Our experiments show that virtually all the bacteria change into the cystic form in the course of just one hour. We can then expose them to almost any antibiotic medication, but nothing destroy these.

It is well known that these bacteria migrate and thrive in parts of the body with little oxygen, such as joint tissue. They lie there and wait for the host's health to deteriorate. Bacteria constantly leak out into the bloodstream. The patient is given antibiotics, which destroy the bacteria that leak out, the immune system recovers and the treatment stops. But the source is still in the body.

Research on Borrelia and tick-borne diseases has exploded internationally in recent years. For all that, Mysterud and Laane maintain that knowledge about the bacteria remains very limited.

"We may find Borrelia in the blood, while the symptoms have nothing to do with borreliosis. Conversely, the symptoms may be absolutely typical of borreliosis. There are many shades in between, but this is never discussed. The exchange of views now in progress barely scratches the surface, because this is actually staggeringly complex. I have pointed out a problem that nobody has taken very seriously, in my view - at least not many doctors", says Laane.

• Borrelia burgdorferi is a corkscrew-shaped spiral bacterium, or spirochaete. Spirochaetes are evolutionarily ancient forms that arose when there was no oxygen in the atmosphere.

• The bacterium is named after the medical entomologist Willy Burgdorfer who, together with Alan Barbour and Jorge Benach, detected it for the first time in 1981.

• It consists of at least 12 different genetic variants, but only three of them are known to make humans ill.

• The bacterium is primarily transmitted to humans through bites from different species of ticks (Acarina). In Norway it is the castor tick (Ixodes ricinus) which is the most important infectious agent. In some areas, around a quarter of the nymphs and half of the adult ticks are infected by the bacterium.

• The tick excretes an enzyme with an anaesthetic action when it is going to suck blood, with the result that many people do not notice that they have been bitten. An important symptom of infection is a ring-shaped red rash Erythema migrans (EM) on the skin where the tick has bitten, which may gradually enlarge.

• An EM rash is a one hundred per cent sure sign of infection; the problem is that less than half of those who are bitten by ticks develop EM. At worst, the infection may be treated too late or not at all. This may result in it becoming chronic.

• Borrelia has been found in a large number of species of birds and mammals, and in some insects and arachnids. It can be transmitted in other ways than through tick bites. Cysts may be hardy and survive in distilled water for several years. Borrelia is a naturally occurring bacterium (symbiont) in many species of animal.

The official name of the disease is Lyme borreliosis, after an epidemic among children in the town of Lyme, Connecticut, in 1976.

If it becomes chronic, it may cause a serious deterioration in a person's health.

Borrelia infection can cause diseases that affect the skin, nervous system, heart and joints, often after a long time.

Borrelia infection may be one of several underlying causes of Alzheimer's disease, chronic fatigue syndrome, multiple sclerosis and mental illnesses.