It will now be possible to detect cancer by measuring the elasticity of tumours. The method is cheap, safe and radiation-free. 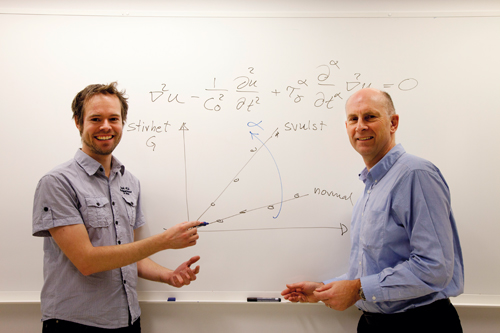 MEASURES STIFFNESS: As tumours do not have the same elasticity as health tissue, it is possible to detect tumours by measuring elasticity of soft tissue. This method is called elastography. "Wave velocity in ultrasound measurements increases the more dangerous the tumour is", explains Professor Sverre Holm (right) and Postdoctoral Fellow Peter Näsholm in the Department of Informatics at UiO. Photo: Yngve Vogt

As one of the first countries in the world, Norway will be testing a completely new method for detecting cancer. This is done by measuring the elasticity of tumours. The method is called elastography. You may as well learn this new word right away; in a few years, elastography may be as common as X-rays.

"Elastography gives oncologists yet another method for detecting tumours. Elastography may be especially suitable for determining how serious the illness is," says radiologist and clinical consultant Per Kristian Hol at the Intervention Centre at Oslo University Hospital, Rikshospitalet.

To detect cancer, determine how the cancer is developing and how dangerous it is, hospitals must often use large and expensive methods such as X-rays, MR, CT or PET.

"Some of the methods use a lot of  radiation. Others are very expensive to run."

Every year, nearly one hundred Norwegians get cancer from X-rays. This is what radiologist Lars Borgen found in his dissertation in clinical medicine last year. The radiation from a round in a CT machine is ten times higher than the average background radiation during an entire year, according to particle physicist Erlend Bolle. For PET scans, the patient is injected with radioactive tracers.

"We want the best possible diagnostics with the least possible radiation. Elastography is completely safe."

Elastography can be combined with either MR or ultrasound. MR machines are expensive. 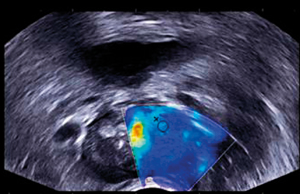 "Ultrasound is cheap, but the result depends a lot on how good the ultrasound examination is. In the future, we envision that elastography will be performed at a regular doctor's office", says Hol.

The University Hospital is now planning to test the method on patients.

"We still don't know a lot about elastography, but the method looks promising. If elastography is the technique we are hoping for, this can become an important examination in the future. This would allow us to use elastography to characterize different types of tumours, such as cancer of the liver", says Anne Cathrine T. Martinsen, who is the Section Manager of diagnostic physics at the Intervention Centre and Associate Professor in the Department of Physics at the University of Oslo.

"Different tumours at different stages of the development of the cancer have different elasticity. Tumours may be less or more elastic than healthy tissue. Some tumours may spread, while others do not. In other words, we can get an entirely new map of organs and tumours by measuring elasticity."

Researchers at the Hôpital Beaujon university hospital in Paris are already testing elastography on patients with liver fibrosis, an illness in which the liver has become stiff due to hepatitis or alcohol damage.

The Intervention Centre is now planning to test the method on Norwegian patients with liver fibrosis. The method can replace biopsy. This means that patients do not have to have a needle inserted into their liver.

The trick: divide the waves!

"Elastography-ultrasound is completely different from the current use of ultrasound. Traditional ultrasound sends out a signal that returns as an echo. The problem is that it is impossible to distinguish between malignant and benign tumours with regular ultrasound", says Holm.

And this is where Apollon gets to the point: Ultrasound creates two types of waves. The most common type is pressure waves. Pressure waves go down into the tissue. The other waves are created by the radiation pressure from pressure waves and run horizontally. These waves are called shear waves.

While pressure waves are mostly affected by fluids, the shear waves capture the characteristics of the other 30 per cent of the body that does not consist of water.

Until today, it has not been possible to measure shear waves.

"We study how the shear waves behave in the tissue, and look at viscosity (studies how liquid the fluid is), attenuation and velocity", says Holm.

"A regular ultrasound scanner takes a hundred images a second. The speed must be increased to a thousand images a second in order to capture shear waves. To manage this speed, we must sacrifice some of the image quality", says Postdoctoral Fellow Peter Näsholm in the Department of Informatics.

French researchers believe that in the future, elastography can replace mammography. Mammography uses X-rays to examine breasts. Any dose of radiation is unfortunate.

"Elastography can be an important supplementary examination in the diagnosis of breast cancer. Large clinical trials will be carried out in the near future to see if we can replace mammography with elastography", says Professor Mickael Tanter at ESPCI, the technical university college for industrial physics and chemistry, which is behind the technology used by the French ultrasound company Supersonic Image.

The Intervention Centre is less certain than the French professor.

"If elastography is to replace breast cancer screening, it must be able to see smaller tumours and to see the tumours better than it does currently. In mammography, it is difficult to detect small tumours. There is hope that elastography can also be used to see small tumours, but there is still quite a way to go", notes radiologist Per Kristian Hol.

• Tumours have a different elasticity than healthy tissue. Elastography is a completely new method that measures the elasticity of tissue.

• Elastography is completely safe and can in the future be done at a regular doctor's office.

• Oslo University Hospital and the Hôpital Beaujon in Paris are the first hospitals in the world to test the new method.