The number of incorrect cancer prognoses can be halved with computerised image analysis. In three years time, the method can be used on patients with bowel cancer, ovarian cancer and prostate cancer. 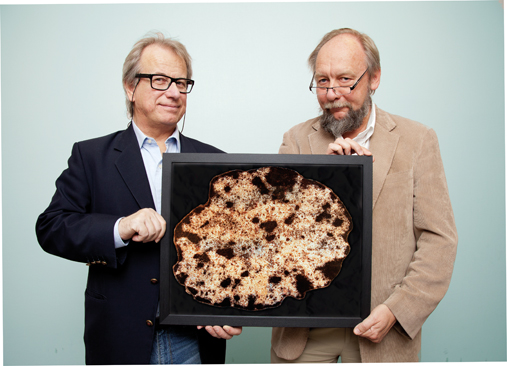 CHECKS THE CELL NUCLEI: Professors Håvard Danielsen and Fritz Albregtsen have developed a sophisticated computer programme that can calculate the malignancy of cancer tumours by studying the composition of the DNA strand in the cell nuclei. Photo: Yngve Vogt

Today, too many cancer patients are over- or under-treated because the pathologists simply do not know enough. The prognostic certainty is only 60 per cent.

Pathologists, cell biologists and computer scientists at the University of Oslo have now developed a fully automated method that can determine the seriousness of a cancer prognosis with 80 per cent certainty. This means that the number of errors can be halved. In a few years, the method can be used in hospitals, initially with patients with bowel, ovarian or prostate cancer.

Cancer prognoses are currently made by studying tissue samples from the cancer in a microscope.

"Pathology is a vulnerable scientific part of medicine. When pathologists look at a section they must compare the results using their own memory. The results can vary from pathologist to pathologist. The results can also vary from the same pathologist between Monday and Friday. Though pathologists can diagnose cancer with 100 per cent certainty, the assessment of how serious the cancer is and how far it has advanced is very uncertain. There are no absolute 'yes' or 'no' answers. The answer determines whether the patient receives treatment A or B. Pathologists disagree because the methods are not good enough. Their analyses are based on their own best judgement", says Håvard Danielsen, Head of Research in the Institute for Medical Informatics at Radiumhospitalet and Professor at the University of Oslo. He is at the forefront worldwide in digital interpretations of pathological sections.

Together with Fritz Albregtsen in the Department of Informatics he has spent the past twenty years developing the new method, which makes it possible to increase the likelihood of a correct cancer prognosis by 33 per cent.

The two scientists point out that their method will not replace pathologists, but will be a tool that assists them.

On and off genes

Even if two patients receive the same risk assessment and the same treatment, one may die while the other gets well.

This has to do with epigenetics. Epigenetics is a modern science about the on and off buttons in genes.

"Previously, scientists said that mutations are important in cancer. Nevertheless, it is important to know which genes are turned on or off.

Genes in cancers are turned off and on differently than in healthy cells. Which genes are turned on and off can therefore be the difference between life and death.

"The instability in the genome has therefore become important in cancer research."

The answers are in the cemetery

The method is built on very sophisticated image analyses of all cancer sections from patients from the past twenty years, and combines the answers with what has happened to each patient.

"We gained access to a large archival material of pathological sections from 5,000 patients with colon and rectal cancer, for ten years from the time of their diagnosis. We picked out 300 patients, half of whom did well and half of whom did not."

Using sophisticated image analysis, they could see how the chromatin (the mixture of the DNA string and all the other proteins in the cell nucleus) were organised. They analysed up to 2,000 cell nuclei from the same patient.

The DNA string consists of more than 20,000 genes and is nearly two metres long. In order to fit the entire DNA string into a cell nucleus, which has a diameter of only six micrometres, parts of the genes must be packed tightly. Nature is so cleverly constructed that the genes that are tightly packed together are turned off.

The others are on. It is possible to colour the active genes with a special dye. The light sections are active genes, while the dark sections show the parts of the DNA string that are turned off.

The likelihood of a correct prognosis increases by 33 per cent.

Image analysis can interpret the organisation of the DNA in the cell nucleus by looking at the textures.

"The pattern of your shirt is an example of texture. The differences between cell images with good and bad prognoses are quite small. We use mathematical and statistical methods to map the texture patterns. These are impossible to see with the naked eye. We have tested many methods for texture analyses. Only our imagination limits how the methods can be used", says Fritz Albregtsen.

The goal is to find a small number of parameters that allow the method of analysis to clearly distinguish between good and bad prognoses.

It is not enough for the image analysis programme to recognise genes that are turned on or off in a cell nucleus. The programme must also be able to specify where the cell nuclei are in a pathological section.

A cell nucleus is only a small part of a cell. Further, tumours can contain foreign cells such as connective tissue cells and blood cells. These cells should not be captured.

"In other words, we are to only recognise nuclei in the cells that were alive before the cancer sample was taken."

In collaboration with Karolinska University Hospital in Stockholm, Oxford University and Harvard University, the Norwegian scientists are now testing the method on other pathological cancer sections.

"We have reached a breakthrough. In three years, we hope to be able to use the method in clinical practice", says Håvard Danielsen. He has had funding for the research project from UiO and Radiumhospitalet, as well as from the Research Council of Norway, the Southern Eastern Norway Regional Health Authority and the Norwegian Cancer Society.

• Current cancer prognoses have a 60 per cent certainty

• The cancer prognoses become 80 per cent certain with the new computerised method.

• The computerised method calculates the cancer prognosis by looking at how the DNA string is packed in cell nuclei.

• The method can be used in clinical practice in three years.