University of Oslo
Main navigation
Sub navigation
Articles > 2013 > Vitamins in a box: Can damage the body’s own defences

Vitamins in a box: Can damage the body’s own defences

Each year, we spend billion of dollars on dietary supplements. New research indicates that vitamin pills may upset the fragile balance in our cells and thus cause more harm than good. 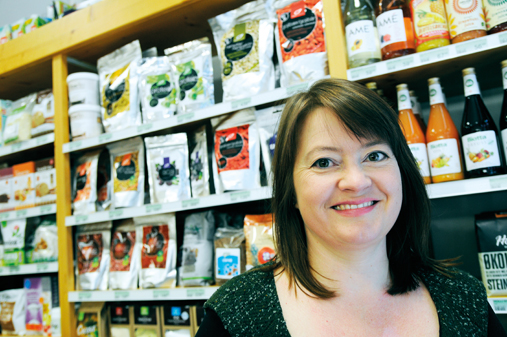 APPREHENSIVE: – I fear that the fragile balance in our cells can be upset when we supplement our diet with vitamin pills, says Hilde Nilsen, researcher at the Biotechnology Centre, University of Oslo. Foto: Ola Sæther.

Vitamin supplements are a billion-dollar industry. We want to stay healthy and fit and help our bodies with this. But perhaps we are achieving precisely the opposite?

– We believe that antioxidants are good for us, since they protect the cells from oxidative stress that may harm our genes. However, our bodies have an enormous inherent ability to handle stress. Recent research results show that the body’s responses to stress in fact are important in preventing our DNA from eroding. I fear that the fragile balance in our cells can be upset when we supplement our diet with vitamin pills, says Hilde Nilsen to the research magazine Apollon. Nilsen is heading a research group at the Biotechnology Centre, University of Oslo.

Our DNA – the genetic code that makes us who we are – is constantly exposed to damage.

In each of the hundred trillion cells in our body, up to two hundred thousand instances of damage to the DNA take place every day. These may stem from environmental causes such as smoking, stress, environmental pathogens or UV radiation, but the natural and life-sustaining processes in the organism are the primary sources of damage to our DNA.

How can the repair of damage to our DNA help us stay healthy and live long lives?

A small worm provides the answer

To answer this question, Hilde Nilsen and her group of researchers have allied themselves with a small organism – a one millimetre-long nematode called Caenorhabditis elegans (C. elegans). This roundworm, which lives for only 25 days, is surprisingly sophisticated with its 20 000 genes; we humans only have a couple of thousand more.

– C. elegans is a fantastically powerful tool, because we can change its hereditary properties. We can increase its ability to repair DNA damage, or we can remove it altogether. We can also monitor what happens when damage to DNA is not repaired – in several hundred specimens and through their entire lifespan.

Different “repair proteins” take care of various types of damage to the DNA. The most common ones are repaired by “cutting out” and replacing a single damaged base – by itself or as part of a larger fragment.

Affecting lifespan with the aid of genes

In some specimens that do not have the ability to repair the damage, the researchers observe that the ageing process proceeds far faster than normal. Is it because the damage accumulates in the DNA and prevents the cells from producing the proteins they need for their normal operation? Most researchers have thought so, but Hilde Nilsen doubts it.

One of the genes studied by the researchers has a somewhat shortened lifespan: on average, this mutant lives three days less than normal. Translated into human terms, this means dying at the age of 60 rather than at 70.
– We were surprised when we saw that these mutants do not in fact accumulate the DNA damage that would cause ageing. On the contrary: they have less DNA damage. This happens because the little nematode changes its metabolism into low gear and releases its own antioxidant defences. Nature uses this strategy to minimize the negative consequences of its inability to repair the DNA. So why is this not the normal state? Most likely because it comes at a cost: these organisms have less ability to respond to further stress ‒ they are quite fragile.

Hilde Nilsen and her colleagues have now –for the very first time – shown that this response is under active genetic control and is not caused by passive accumulation of damage to the DNA, as has been widely believed.

This provides an opportunity to manipulate these processes. And that’s exactly what we have done: we have re-established the normal lifespan of a short-lived mutant by removing other proteins that repair damage. Hence, the cause could not be accumulation of damage, since there is no reason to assume that a mutant with no other alternative ways to repair its DNA will be less exposed to damage. There must be something else.

The researchers have gone on to discover that this “something else” in fact is the other repair proteins. They believe that the proteins inhibit damage that they fail to repair completely.

– The consequence is that they establish a barrier – a road block. This triggers a cascade of signals that reprogram the cell.

– Wouldn’t this imply that the repair proteins defy their own purpose – after all, the result is a shorter lifespan?

– We need to remember that most likely, the purpose of the DNA repairs is to ensure that we produce healthy offspring – not necessarily that we live as long as possible after our reproductive age interval. Initiating a survival response that reinforces the antioxidant defences means that a lack of ability to repair the DNA has less impact than it would otherwise have on our reproduction. To the species as a whole, it’s a small cost that some individuals will be less good at handling stress and have a shorter life.

Because this is an active process within the cells, the researchers refer to it as reprogramming.

– We have found several proteins that trigger this reprogramming. The process has the same effect as a reduction in caloric intake, which we know helps increase the lifespan in many species. In other words, there are two routes to a long life. When we stimulate both of these two routes in our nematode at the same time, we can quadruple its normal lifespan, Nilsen says.

Can do great harm

The balance between oxidants and antioxidants is crucial to our physiology, but exactly where this equilibrium is situated varies from one person to the next.

– This is where I start worrying about the synthetic antioxidants. The cells in our body use this fragile balance to establish the best possible conditions for themselves, and it is specially adapted for each of us. When we take supplements of antioxidants, such as C and E vitamins, we may upset this balance, the researcher warns.

– It sounds intuitively correct that intake of a substance that may prevent accumulation of damage would benefit us, and that’s why so many of us supplement our diet with vitamins. Our research results indicate that at the same time, we may also cause a lot of harm. The health authorities recommend that instead, we should seek to have an appropriate diet. I’m all in favour of that. It’s far safer for us to take our vitamins through the food that we eat, rather than through pills, Hilde Nilsen states emphatically.

The National Research Centre in Complementary and Alternative Medicine (NAFKAM) has investigated the volume of dietary supplements consumed in Norway in 2012: