Long-term research collaboration has helped reduce maternal mortality in the Gambia to less than half its previous level over 14 years. However, the country is still facing numerous challenges in terms of health. 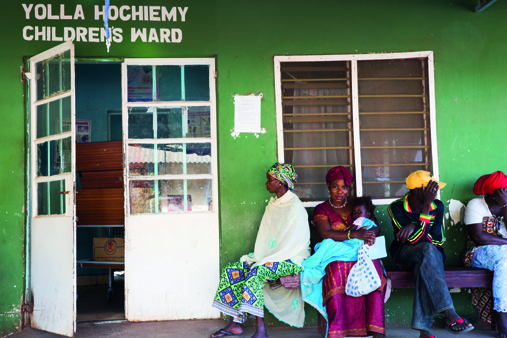 Low status: Women seek out the health services in the Gambia, but their needs are not being met. They have no experience of good-quality health services and thus do not know what to ask for. These women are waiting for treatment outside one of the rural hospitals in the Gambia. Photo: Camilla Smaadal

Johanne Sundby, gynaecologist and professor of social medicine, is on field work in the area and is asked to examine the pregnant woman. The woman is suffering from delayed progress in her delivery – the baby’s head has not entered the birth canal, in spite of the contractions – and if the baby is to survive she must be sent to hospital. An ambulance is called, but the road to the nearest hospital is long and arduous. The woman must cross the river on an overloaded ferry. If she is lucky, she will catch the fastest ferry and arrive at the hospital in time. If only the slow ferry is available, the outcome may be fatal. The latter is often the case. Poor infrastructure, lack of doctors and adequate health facilities are only some of the causes of the country’s high infant and maternal mortality rates, which have long remained among the highest in the world.

This notwithstanding, improvements have been made compared to the conditions in the country some decades back, as Johanne Sundby can ascertain. In 1993, she was asked to travel to the Gambia to lend her competence to a narrow research area related to fertility. Since then, other research projects have been added, and a long-lasting academic friendship has developed.

Along with Gambian researchers, Sundby has detected a number of flaws in the Gambian health system and investigated factors that affect women’s reproductive health, related to reproduction, sexuality, abortion, pregnancy and birth. Visits to clinics, conversations with researchers and politicians and fieldwork in poor villages far removed from the comfortable lives of the tourists on the beach have not only provided Sundby with a unique insight into the culture and the country, but have also helped establish a long-term collaboration between the University of Oslo and the Gambian health services. This collaboration is benefitting the Gambians, but it has also provided Norwegian researchers with valuable experience and understanding of how health systems work in poor countries and what is hindering women from receiving adequate health services.

“We cannot generalise all the data, but the research nevertheless illustrates a number of key points, for example that women are given low priority in the health services and that maternal mortality and the quality of the health services are closely interrelated,” Sundby says.

Many women in the Gambia have no experience of high-quality health services, so they do not know what to ask for.

“Working with global health has made the connection between reproductive health and politics visible, and we seek to communicate this research to policy-makers who can improve the country’s health services. This includes travelling to international conferences to present our projects, to draw attention to the status of women in the poor regions of the world. I believe that this is one of the most important results to come out of this collaboration,” Sundby states.

From village boy to director of health

Another key part of this collaboration has consisted in building competence and training young Gambian researchers. The midwife and nurse Mamady Cham is one of them. He grew up in a thatched hut in the countryside with no electricity, but worked his way up to a completed PhD degree in Norway.

He documented the high maternal mortality in the country, including in the hospitals, and showed that anaemia and pregnancy-related haemorrhages were the main causes. When he returned, he was appointed director of health in the Gambia, and took a number of decisions on rectification of the flaws in the health system.

These changes in policy have produced a massive decrease in maternal and infant mortality. The country’s minister of health recently declared that maternal mortality rates have decreased by more than 50 per cent over the last 14 years.

Cham has also prepared thorough guidelines on matters such as blood transfusions. Today, he is director of one of the largest hospitals in the Gambia.

“This collaboration has been extremely useful for both parties, especially for the Gambians. Many of the researchers have returned to high positions in the health system or taken leading roles in research projects. This is important to us, because we are going to use these data to improve public health and build better facilities,” says Cham.

He recounts that the country still faces may challenges in terms of health, including in reproductive health and illness linked to malaria, HIV and AIDS. Despite the decline, maternal mortality rates in this small country remain high.

“Establishing a health system that functions optimally all over the country will be the major challenge in the years to come,” he says.

A difference from aid as such

Together, the researchers have pointed out a number of flaws in the health system, identified poor infrastructure and a lack of drugs and opportunities for blood donation and Caesarean sections. The Gambian health authorities have started to acknowledge the problems and improve the situation. Sundby believes that it is of prime importance that the Gambians themselves have collected the data.

“Reinforcing the educational system in less resourceful countries is a precondition for promoting development. The authorities tend to listen more carefully to the problems when they are voiced from within. It’s not me coming to the country, telling them what to do. The Gambians themselves identify the problems and prepare the research questions. Then we discuss how we best can address the problems jointly. Only equal partnership and shared projects can produce sustainable competence. In my opinion, no other development aid activities produce better outcomes than improving the training of local people, permitting them to build capacity by themselves,” Sundby concludes.

By Camilla Smaadal
E-mail this page