Researchers have found a possible molecular explanation for why overweight is harmful. This new knowledge may provide new drugs for heart attack, stroke, cancer and chronic intestinal inflammation. 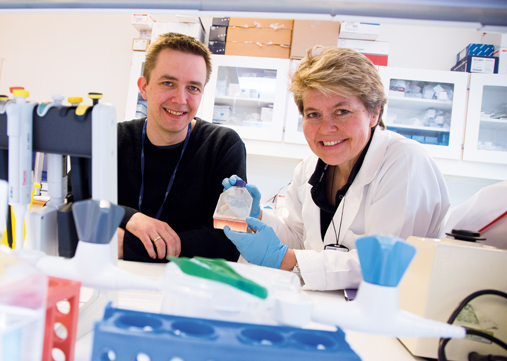 BALANCE: Too much and too little nutrition may both upset the balance of the immune defence system and increase the risk of diseases, according to Arne Yndestad and Bente Halvorsen. Photo: Yngve Vogt

“We believe that there is a connection between metabolism, inflammation, heart attack and stroke,” says Bente Halvorsen, professor at the Research Institute for Internal Medicine, University of Oslo. Together with the research group’s leader, Pål Aukrust, who last year received the university’s research award for his work on inflammatory diseases, and researcher Arne Yndestad, she has looked deeply into the molecular explanation of why overweight is harmful. “With this new knowledge, we can better understand why too much food can cause such serious diseases as heart attack, stroke, cancer and chronic intestinal inflammation.”

We eat too much

Overeating increases the immune response. This increased immune response causes the body to generate excessive inflammation, which may lead to a number of chronic diseases.

“It is therefore important to keep a balance. Too little and too much nutrition may both upset the immune defence system and increase the risk of disease.”

A number of diseases are caused by inflammation. Arthritis is a chronic inflammatory disease. Heart attack is an example of a disease that causes an acute and powerful inflammatory reaction.

Unfortunately, storage of energy causes an inflammatory reaction. The explanation lies in the close connection between the body’s immune system, energy conversion and the way in which we store energy. It can all be explained in terms of evolution. In our ancestors many hundred million years ago, this was all concentrated in one single organ, like in the modern-day fruit fly. Even though in humans this task is divided among three organs – the fatty tissue that stores energy, the liver that converts energy and the immune system – these organs still communicate closely with each other.

Evolutionarily speaking, humans are not made to eat so much on the contrary; they are intended to toil for their food.

“Mankind’s great challenge has consisted in obtaining sufficient food and surviving infections. Today, we rarely die of infections, but on the other hand we eat too much,” says Arne Yndestad.

Damage to the powerhouse in the cells

The researchers believe that overeating may cause stress to the mitochondria. The mitochondria are the cells’ powerhouses, converting fatty acids to energy.

Evolutionary biologists believe that mitochondria were bacteria that as life has developed have become an integrated part of our cells. The immune system may nevertheless perceive the mitochondria as foreign bodies. Much immunological research therefore focuses on the mitochondria.

When fatty acids accumulate in the cells, the mitochondria become stressed and gradually also damaged.

“When the cells receive excessive energy, the system starts to falter, and the engine may stall. Too much fatty acid causes an oxidative stress in the cells. We believe that long-term stress on the mitochondria may cause metaflammation. A metaflammation is a low-grade chronic inflammation over many years, and unfortunately it’s a condition that’s difficult to detect,” says Yndestad.

Key signal molecules have been found

The UiO researchers, who also work at the new K.G. Jebsen Inflammation Research Centre, have studied some of the signal molecules inside the cells that trigger the inflammatory reaction. In other words, they have found one element of the energy conversion that may explain what happens when the mitochondria are dealing with the fatty acids. The special element, which is also an enzyme, has previously been studied in stroke patients.

“We believe that this enzyme can be regulated by overnutrition and that it is a key constituent in the inflammatory reaction. We have found that the plaque in the arteries of patients with arteriosclerosis contained a lot of this enzyme. When the plaque bursts, the patient may suffer a stroke,” Halvorsen points out.

In trials with mice, the researchers have tested what happens when the amount of this special enzyme is increased. It reduced the degree of arteriosclerosis.

Their theory was strengthened when they studied how the absence of inflammasomes had an effect on heart function. Inflammasomes are part of the intra-cellular immune defence system.

“When the cells received excessive amounts of fatty acids, the inflammasomes were activated, causing an inflammation.”

Mice with heart attacks functioned better when the inflammasomes were removed.

“So this is about restoring the balance in the immune defence system”, says Yndestad .

A correlation with cancer

The researchers believe that their new discovery may also be a key mechanism in the development of cancer.

“Cancer cells need access to a lot of energy to divide. The cellular stress may transform cells to cancer. Studies of overweight may therefore give us a better understanding of cancer,” Halvorsen explains.

One who is particularly interested in this research is Professor Kristin Austlid Taskén at the Institute for Cancer Research.

“People who are overweight more often develop an aggressive variant of prostate cancer. Although the connection between overweight and cancer is well known, however, little is known about the mechanisms involved” Taskén says.

Her specialty is prostate cancer, a disease that strikes 5000 Norwegians each year.