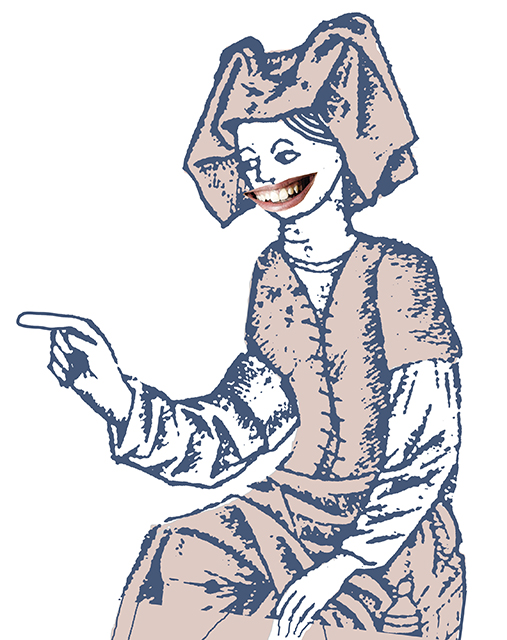 The things that medieval elites considered amusing can act as a window on their interpersonal relations: humour created a form of group solidarity and a clear distinction between friends and foes, thus revealing the power and value of entertainment, according to Beate Albrigtsen Pedersen at the Department of Archaeology, Conservation and History at the University of Oslo.

Pedersen seeks to explore what entertainment and comedy meant to Norwegian and Icelandic society and politics in the 13th century.

– Humour has always been a part of our lives, and we have always had the ability to laugh at things, but there has been little research into the role of humour in medieval Norse society and how the forms of humour changed over time.

The historian believes that knowledge about the jesting and spite favoured by the aristocracy can help us better understand the society and people of the 13th century.

– Humour is often regarded as a flippant research topic, but the ability to be amused and laugh is an important part of life and may thus provide us with an alternative perspective on the Middle Ages. Our relationship to the saga literature is steeped in national romanticism, and I believe that reading it as entertainment literature will bring out new aspects. The sagas were also intended to amuse people, she says.

And the aristocrats knew well how to have a good time, according to Pedersen.

– The elite used humour very deliberately – most often to ridicule others. Humour established a form of group affiliation and a clearer distinction between friends and foes.

Sarcastic comments and put-downs are elements of our contemporary humour as well, but the essential matter is how it was perceived. Self-irony is a key element in Pedersen’s analysis of medieval humour, or more precisely: the absence of self-irony. With no redeeming self-irony, this form of humour was often used to defeat political opponents, or to assert oneself and shame others.

– Modern humour is largely based on self-irony, permitting us to laugh at ourselves and others, without any repercussions.

New courtly ideals were introduced in the late 13th century as the old society of rival chieftains was replaced by the ideal of the king as the sole ruler, chosen by God. Pedersen is studying what happened to humour during this transition and how the elite culture changed.

– As the 13th century draws to an end, we can see clearer norms for what were permitted as objects of ridicule. The courtly ideals forced the elite to behave with more decorum, resulting in less ribaldry. At the same time, we can see that self-irony is becoming more common as the 14th century approaches. Sarcastic comments by members of the elite no longer entailed the same grave consequences. They took the ridicule differently – by holding their heads high.

Written by and for a social elite

The humour researcher has reviewed a series of sagas, with sources ranging from the sagas of Icelanders and tales of kings and knights to ideological writings.

– I search for humorous features that recur in the sagas, such as ordinary jokes, insults, imagery and metaphors that evoke laughter in different scenes. If I come across similar situations, although laughter is not mentioned explicitly, I may assume that they were intended to be humorous as well.

Pedersen uses the term humour, although this concept did not exist in medieval times.

– My research refers to our concept of humour. Humour remains a difficult concept to define. I study the things that they found comical, both what was intentionally comical and what was perceived as such, by the numerous characters in the sagas as well as by potential listeners in the 13th century.

Admittedly, all sources are concentrated at the upper echelons of society.

– The sagas were written by and for an elite, so it’s difficult to draw any conclusions about the common people. Politics and everyday life went hand in hand for the aristocracy. It is essential to bear in mind that it is the sources’ portrayal of life – and how they wanted to describe the past and future – that emerges, Pedersen explains.

In politics, humour was used to add fuel to rivalry and create conflicts – by laughing or remaining silent, the aristocrats took sides in the conflict.

– A prime example is in the story of the wedding at Reykjahólar in the early 12th century in Þorgils saga ok Hafliða, when a great feast was held, Pedersen says.

An elderly chieftain is suffering from indigestion. He has heartburn, is burping and feeling quite uncomfortable. The jokes would often be delivered in verse form, and another chieftain stands up and improvises a spiteful verse. A verbal battle ensues between several of the men, and the entire company is laughing at the smelly chieftain. The insolent comments keep coming, and the foul-smelling man finally picks up his things and leaves.

– Scenes like this are quite common; the humour is condescending, people are kicking the little guy, most often deliberately wanting to cause insult. We only very rarely see situations in which everybody is laughing together, in a friendly atmosphere. Most often, the joke is at somebody’s expense.

Black humour also had a natural place in medieval life.

– The typical form this takes is a final punchline before someone dies. A concrete example is provided by Njáls Saga, in which there is a description of a swordfight that ends when one of the fighters cuts off the other man’s leg. Kol, the man with the severed leg, looks in alarm at the stump, and his adversary remarks: ‘There’s no need to look, it’s just like it seems, the leg is off.’ We may regard such final quotes as a dry form of humour, and I believe they were meant to be so at the time of writing as well.