Mathematics to reveal the secrets of the brain

Top researchers will now be using mathematical modelling and heavy computations to understand how the brain can both remember and learn. 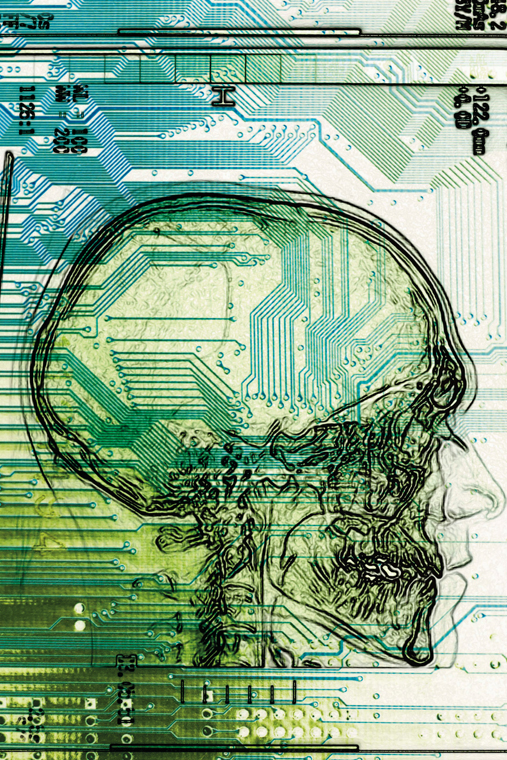 COMPUTATIONS: Brain Researcher Marianne Fyhn receives computation help from, among others, Gaute Einevoll and Anders Malthe-Sørenssen to acquire an understanding of how the brain Works. Photo: Scanpix.

Ten years ago, when the team of Marianne Fyhn and Torkel Hafting Fyhn cooperated with the Nobel Prize winning team of May-Britt and Edvard Moser at NTNU, they discovered the sense of orientation in the brain.

Now, in their own brain research group at the University of Oslo, they are studying how the brain is able to store new memories while being so stable that old memories are not diminished. They have recently established close cooperation with the foremost computation experts at the University of Oslo. Because regardless of how many experiments they do, they are dependent on mathematical expertise to find the connections between the enormous number of processes in the brain.

– In experiments we can place electrodes in the brain. Yet no matter how many electrodes we place in the brain to measure brain signals, we only get to see a glimpse. Our brain consists of hundreds of billions of cells, and each of them has thousands of contacts. We therefore need mathematical models to fill in all the points that we cannot measure, in order to acquire a complete understanding of the interaction between them, says Marianne Fyhn, who is an associate professor in the Department of Biosciences at the University of Oslo. She is now the head of a new research group at the Faculty of Mathematics and Natural Sciences that will link experimental biology with computation-oriented physics and mathematics. She believes that the computations can lead to even better experiments.

– Experiments are expensive and demanding. Mathematical models can give us an idea of where we should take a closer look, so that our experiments can be even more targeted.

One of Marianne Fyhn's new research projects is to find out what takes place in the brain during learning. One hypothesis is that certain molecules, which form fishnet-like stockings around certain types of brain cell, are important so that the brain is capable of both learning and having a stable memory at the same time.

– We know that these brain cells are important for plasticity, i.e. the brain’s ability to learn and remember.

– The brain has a big dilemma. It must be static so that memories can be stored and we can remember things from far back in time. At the same time, the brain must be so flexible that we are able to learn new things.

The "fishnet stockings" closely envelop the points of contact between the brain cells with the highest levels of activity. Brain cells communicate with chemical substances and electrical charges.

Researchers believe that these "fishnet stockings" are important in order to stabilise memory and make the brain changeable at the same time.

The big question is therefore what will happen when the stockings are removed and how this will affect the transmission of signals between brain cells.

In experiments she can remove the "fishnet stockings" physically from certain brain cells and study what happens. However, it is only possible to study a limited number of cells. To study the interaction between these cells and the rest of the brain, they must have mathematical help.

– Brain cells with fishnet stockings dampen the level of activity. If this activity had not been dampened, the brain would go amok. This could result in an epileptic seizure. A mathematical model can explain the orderly distance between the points. 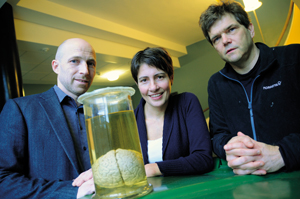 SIMULATING THE BRAIN: To understand how this huge network of billions of nerve cells in the brain works, Anders Malthe-Sørenssen (on the left), Marianne Fyhn and Gaute Einevoll must resort to enormous computations on the university's powerful computational computer. Photo: Ola Sæther

Marianne Fyhn is now receiving a helping hand from the foremost computation experts at the University of Oslo.

– Physics can be used to understand fundamental biological processes. For example, the electrical signals in the brain can be explained by pure physics. Cooperation with biologists can actually advance physics, says Anders Malthe-Sørenssen. He is a professor in the Department of Physics at the University of Oslo and a leading expert on computations in geophysics.

For the last hundred years, experiments and modelling in physics have gone hand in hand. The goal is to find out how nature works.

– The most efficient means of describing this has been by means of mathematical models, says Malthe-Sørenssen.

Now the life sciences will start to use the same tricks.

– We already have a good mathematical and biophysical description of how a single nerve cell works and how it receives and transmits signals to other cells. However, a single nerve cell is not particularly smart. Unfortunately, we still do not understand very much about how the huge network of billions of nerve cells works. It is precisely this network, which makes us the people we are, that we would like to find out more about, says Gaute Einevoll, who is a professor in both the Department of Physics at the University of Oslo and the Department of Mathematical Sciences and Technology at the Norwegian University of Life Sciences at Ås.

He has been one of the country's leading researchers in brain computations for the last 20 years, and he became interested in neuroscience back when he was in the USA in the middle of the 1990s.

Unfortunately, it is even more difficult to research biological systems than physical systems.

– Biology is even more complex than physics. The brain often has redundancy. This means that if one mechanism stops working, others can take over. In order to understand this, we need mathematical methods, Einevoll points out.

One of his simulation models represents a small portion of the visual cortex. The model consists of 80,000 neurons, divided into eight different types of brain cells. Even if the clump of brain tissue simulated by the researchers is only a few cubic millimetres in size and can hardly be seen by the naked eye, Einevoll must use 80,000 differential equations to describe how the information propagates in the nerve cell network. A differential equation is a mathematical description of something that changes over time. This cannot be solved by pen and paper. The enormous set of mathematical equations must be solved by one of the most powerful computational computers in the country.

His partners in Germany are in the process of creating even larger models of the visual cortex, with two million nerve cells.

From molecules to neuron groups

Now the computational researchers will cooperate with Marianne Fyhn and simulate how the "fishnet stockings" between the cells affect long-term memory and how these molecules lock in knowledge.

They must also model all levels of the brain, all the way from the molecular level, where they look at how the individual nerve cells cooperate, to the consequences this has on the entire network of brain cells.

– When many things happen at the same time, we must have mathematics to keep track of things, says Gaute Einevoll.

However, even though they have the world's fastest computer available, the brain is so complex that they cannot include everything in the model. They must therefore create models for various length and timescales. Then the models must be linked together in what they call a multiscale model.

– I often like to illustrate multiscale models with the physical description of gases. They can either be described on a microscopic scale, molecule by molecule, by means of Newton's mechanics, or on a macroscopic scale by means of thermodynamics, with quantities such as pressure and temperature. And my physics hero Ludwig Boltzmann showed more than 100 years ago how these descriptions are related. We need something similar to describe the brain, says Einevoll.

A multiscale model of the brain can be divided into five levels:

The lowest level is comprehension of what takes place at the atomic level.

The second level is the molecular level. Here the electrochemical machinery in the cell is modelled by chemical equations.

In the third level, a single nerve cell with branches is simulated.

In the fourth level, the link with other nerve cells and how they communicate among themselves through synapses is modelled.

In the fifth and highest level, groups of neurons are modelled.

A banana a day

The computers of the future may perhaps be able to replicate our brain.

– We receive enormous volumes of data, and we do not have enough brain cells to read all the data we receive fast enough. Our brain filters to the extreme. The visual information we receive in a second contains as much information as an entire book. Nevertheless, our brain manages to reconstruct images of our surroundings, says Marianne Fyhn.

Our brain uses only a millionth of the energy required by a powerful computational computer doing the same task.

– Our brain works on a banana day. To simulate what occurs in the brain, we need a computer that uses as much energy as three million bananas a day.

Researchers hope to use this new knowledge about the brain to create even better computers.

In today's computers, the electrons move. In the brain, there are tunnels in the nerve system's membranes that use a millisecond to open and close. When they are open, the brain cells communicate with charged ions.

Even though a single brain cell only sends one to ten electrical pulses a second, and a hundred pulses a second when something very special is happening, this incredibly slow brain of ours manages nonetheless to compete with powerful computers that can add many billions of numbers in a second.

– The explanation for this is good algorithms in the brain. We would like to have the same algorithms in silicon. We would now like to create electronics where we replicate biophysical nerve cells right on the chip, says Gaute Einevoll, who for a number of years has already tried to solve this through the European research projects BrainScaleS and the Human Brain Project.

• Brain researchers are dependent on computational experts in order to understand the connections among the enormous number of processes in the brain.

• To understand the brain, researchers must study the capability of the brain for learning and storing information.

• The computations are so demanding that they must be run on the university's powerful computational computer.

• Mathematical models can provide brain researchers with an indication of the experiments that should be conducted.