Medical radiation may be reduced to one-sixth

One of this century’s most significant mathematical discoveries may reduce the number of measuring points to one-sixth of the present level. This means reduced exposure to radiation and faster medical imaging diagnostics. 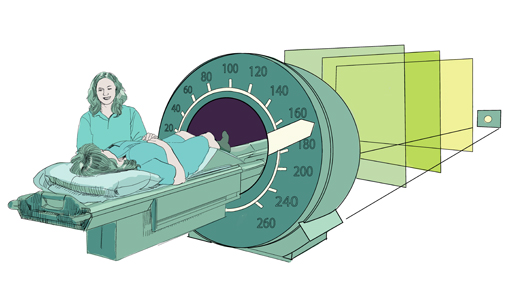 SIX TIMES FASTER: The new mathematical method will make it possible to perform an MR examination six times faster than today. This means that hospitals will be able to perform far more examinations without having to buy any more MR scanners. Illustration: Knut Løvås

Eight years ago Australian-born mathematician Terence Tao launched a completely new and highly sophisticated mathematical theory which may be set to bring about enormous savings in the health sector as well as in the oil industry. The theory is called compressed sensing, and enables compressive sampling without having to look at the raw data first. Physicists at the University of Oslo refer to the method as one of this century’s most significant mathematical discoveries.

“The idea is to solve a task by involving as few measurements as possible. Whenever data capture is expensive, investment in this new mathematical approach may soon prove cost effective,” says Professor Anders Malthe-Sørenssen at the University of Oslo’s Department of Physics. He was completely bowled over by the theory when he happened to attend a talk given by Tao a few years back. Today, Tao is considered one of the world’s most eminent mathematicians. He was only 24 when he, as the youngest person in history, was made Professor of Mathematics at the University of California fifteen years ago. His theory is now generating interest among mathematicians all over the world. 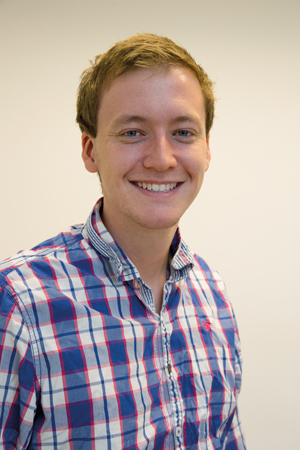 SMART MEASUREMENTS: “Each measurement provides much more information than you think, provided you are smart about the sampling,” says Andreas Solbrå. Photo: Yngve Vogt

Research fellow Andreas Solbrå, whose background is from mathematics, physics and calculation theory, is the first person at the University of Oslo to have put his theory to use.

“Every measurement provides much more information than you think, provided you are smart about the sampling.”

To illustrate the idea about performing as few measurements as possible, Solbrå points to a classic party brain teaser: There are twelve coins in front of you. They look identical, but one of them is counterfeit, and is either heavier or lighter than the other coins. You need to establish which one is the fake by using a pair of scales. Most readers will be able to identify the counterfeit coin in four or five weighings. Incredibly, it is also possible to solve the task in only three weighings. Try it yourself!

It is precisely this principle of sparse sampling which underpins the idea conceived by the Australian mathematician.

“Compressed sensing will enable you to calculate all the things you don’t measure.”

The method is highly calculation-intensive, and may be used to reduce the number of measuring points used for MR examinations to one-sixth of the present level. This means that the MR imaging process may become six times faster than it is today. The method was successfully tested at the American Lucile Packard Children’s Hospital in Stanford a few years ago. They achieved this by being smart about selecting the sampling points for the MR scan.

MR scanners are very expensive machines. A single scanner carries a price tag of NOK 10 -20 million, depending on the technology and the software. The duration of an MR examination varies between 10 and 60 minutes, depending on what the doctors are looking for, according to MR physicist Oliver Geier at Oslo University Hospital’s Intervention Centre.

“A simple examination of a knee takes ten minutes. A cancer check-up may well take more than an hour,” says Geier. “The socio-economic savings may be considerable if it is possible to reduce the time it takes to carry out an examination to one-sixth of the present level.”

“This means that hospitals may examine six times as many patients without having to buy more scanners and increase their staffing levels. There is also reason to believe that the new mathematical method can reduce the level of radiation from CT scans by five-sixths. The results remain just as good”, Solbrå points out.

Today’s CT scanners are not only expensive; they expose patients to doses of radiation which equal ten years’ natural background radiation.

Even if compressed sensing may be set to revolutionize medical diagnostics, the method is not well known.

“Most hospitals will probably not have heard about it yet”, thinks Solbrå.

There is a minor downside to the method. In order to compensate for the sparsity of measurements, more time must be spent on the calculations.

“Today, doctors are able to analyse the medical images straight away. Compressed sensing will introduce a need for computer calculations before the results are ready.”

People who are tasked with implementing the compressed sensing method in medical diagnostics must be highly skilled in maths as well as calculation theory. However, health service staff need not worry.

“The maths is a one-off job”, says Solbrå reassuringly.

The new mathematical method may also bring about major savings for the oil industry. Petroleum geologists depend on seismic measurements which involve sending sound waves into the ground. The sound waves are reflected off the various sediment layers and are then caught by microphones on the surface.

In Norway only very few research scientists are familiar with the method. Solbrå is of the opinion that many researchers will be able to benefit from the new method once they have figured out what it involves.

“Compressed sensing is an exciting method used to speed up MR examinations. The method has been tested on MR for quite a while, without resulting in its widespread adoption. This may be due to the complexity of the reconstruction,” says MR Physics Professor Atle Bjørnerud, who works for Oslo University Hospital’s Intervention Centre as well as its Department of Physics.

Oliver Geier at the Intervention Centre has never personally tested compressed sensing, but points out that the method is under development. One of the manufacturers of MR scanners has already implemented the method; for now however, the new imaging technique has been approved only for research purposes.

“Compressed sensing may enable us to get more patients through the system in a shorter period of time. Whether the method is effective will depend on whether the images produced have qualities that will allow compression,” Oliver Geier points out.