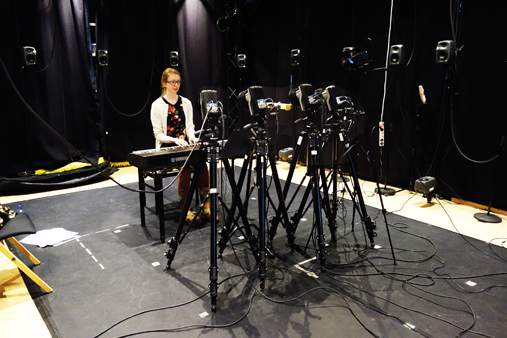 “Pianists’ playing technique  has changed considerably over the last 200 years,” says Christina Kobb, PhD scholar at the Norwegian Academy of Music. For the last five years she has studied piano treatises  of the  early nineeenth century in order to reconstruct the physical approach to piano playing at that time and to determine  whether the music of such great composers as Beethoven and Schubert would sound differently with the reconstructed playing technique.

One of the most comprehensive piano treatises  of the Viennese era was written by Mozart’s student Johann Nepomuk Hummel. Such treatises  describe how young students should be taught to use their fingers arms and elbows. The elbows should be held close to the body, the hands in an askew position  and only the outer joint of the fingers should move when touching the keys. Modern piano techniques typically heldelbows wide to produce a stronger and equal  timbre.

“The old Viennese technique that I have reconstructed provides completely different opportunities for phrasing and another interpretational space for the music than the modern technique does,” Kobb points out.

The big question is whether the audible difference between the old and new playing styles comes down to the different techniques alone.

Rolf Inge Godøy, professor at the Department of Musicology, University of Oslo, has therefore analysed all the movements that Kobb makes while she is playing.

“The fundamental idea is that the body movements create the music. We cannot separate one from the other. This is the basic idea of musical experience. However, we need better documentation in this area,” says Godøy, who is one of the world’s leading researchers in the field of analysing motion in music.

Godøy receives invaluable assistance from the Korean researcher Minho Song, who analyses Kobb’s playing style as she plays a Schubert sonata with both  modern and old techniques.

He attaches 46 small pieces of reflective material to her hands and finger joints, and records all body movements with the aid of nine infrared cameras. The distance between the cameras has been carefully calculated to ensure that he obtains continuous images of all fingers, even if the pianist occasionally should hide her thumb behind the other fingers.

“We reconstruct each reflective point in a three-dimensional format to obtain exact data on how the different parts of the body are moving. We can rotate the images to see the finger movements independently of the camera angles, and we produce separate graphs that show the speed, acceleration and placement of the fingers,” Minho Song explains.

The graphs enable the researchers to understand how the pianist is continuously planning the next event.

“We wish to find details in the articulation. Each keystroke is shaped by what you have done and what you plan to do. This is an insufficiently understood element of music,” Godøy says.

Since the cameras shoot one hundred images per second, the playback speed of the film can be reduced to study the details.

“This is putting music-producing gestures under the microscope. We can now study the tiniest of movements and gain insight into small details that create significant nuances of interpretation in the musical performance.”

Hopefully, the results from the Schubert study will be ready this spring.

“We can already observe clear differences in the two playing techniques,” Godøy says.

His next plan is to measure how pianists use the muscles in their arms, hands and fingers, thus to understand where the energy in their playing originates.