Daily samples of baby poo taken throughout a full year will reveal how the bacterial community changes in the gut of infants. 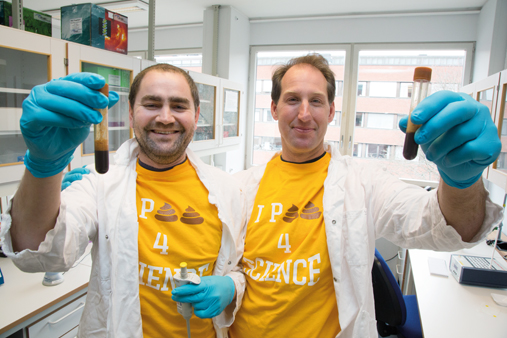 5000 STOOL SAMPLES: Pål Trosvik (left) and Eric de Muinck are set to create a mathematical model of changes to the bacterial diversity in the gut of infants. To achieve this, they will need to run a gene test of 5000 stool samples. Photo: Yngve Vogt

The bacterial diversity of our stools changes dramatically in the course of our first year of life. Newborn babies have no bacteria in their gut. During birth, infants are exposed to the bacteria of their mothers’ faeces. Only when children approach their first birthday will their bacterial diversity be as great as that in adults. The composition of bacteria can impact significantly on their health.

In order to gain a deeper insight into the ecosystem of the gut, researchers from Oslo University are investigating how the bacterial community changes in the gut of infants, from the day they are born to their first birthday.

“Generally speaking, the gut flora has a children’s profile and an adults’ profile. The basic idea of our work is to study the normal development of the bacterial diversity in the gut, and particularly how the gut flora changes when the child starts eating solids, receives medication such as antibiotics, is vaccinated or travels abroad” says researcher Pål Trosvik at the Centre for Ecological and Evolutionary Synthesis (CEES) at the University of Oslo.

Trosvik is part of the research centre – headed by professor Nils Chr. Stenseth – that recently analysed the genetic material of plague bacteria taken from several thousand victims of the great plague epidemics from the Iron Age to the Black Death. DNA analysis has made it possible to explain the evolution of plague bacteria and predict the next outbreak of plague.

“This time around we will be using DNA analysis to create a mathematical model designed to give us greater insight into the ecological balance of the gut,” says Postdoc Eric de Muinck at CEES.

The parents have been given the unenviable task of collecting the faeces from their baby’s nappies.

This is the largest ever infant faeces study of its kind; almost a hundred times larger than earlier studies. In the course of a year, the researchers have been collecting daily faeces samples. We are talking about a total of almost 5000 poo samples.

The poo samples will be run through an enormous sequencing machine. The researchers have so far been working hard to develop the best possible procedure for extracting the DNA from the bacteria.

“Today, this is a messy and difficult procedure. There are no standardized ways of doing it.”

If they were to use the original method, they would have spent a whole year on sequencing the stool samples, which is too long. They have therefore developed a new genetic sequencing method which is many times faster. From the University of Michigan in the US they obtained a sample containing more than thirty different types of bacteria, and they kept sequencing this sample over and over again in search of the optimal method.

The DNA analyses generate enormous amounts of data. We are talking about several hundred gigabytes of information.

In order to calculate the link between all the different genes, the researchers need to make use of the country’s fastest calculator, the Abel high-performance computer cluster at the University of Oslo, which is ten thousand times faster than your average home computer.

Researchers are hopeful that they will learn a lot about the ecological balance in the gut. They also want to establish what bacterial groups have an influence on each other. Our understanding of this is still scant.

“Think of the entire bacterial community as a network. Some bacteria will affect each other positively, others negatively. Some bacteria sustain themselves from large molecules which they break down into smaller molecules that may benefit other bacteria. In other words, these bacteria produce food for other bacteria. Some bacteria are essential to the network and influence many different types of bacterial groups. We call them fundamental bacteria. It is possible to envisage that in future, we will be able to use these foundation bacteria in medical treatments.” But Pål Trosvik points out that for now, this is mere science fiction.