Solar storms can paralyse modern communications. Researchers will now launch a swarm with rockets to find out why. Their goal is to develop better space weather forecasts. 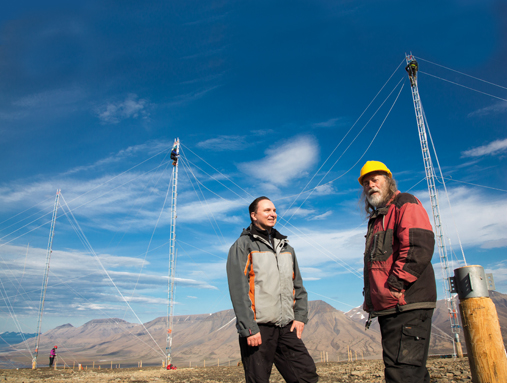 Solar storms can generate spectacular displays of northern lights on Earth. Unfortunately, the solar storms can also knock out aircraft navigation and radio communication systems. Only a half a year ago, in early November 2015, the solar storm was so intense that all air traffic was cancelled in southern Sweden. This is a rare occurrence, however. The risk of air traffic chaos is at its highest in Arctic regions.

Solar storms are detrimental not only to air traffic; they can also cause damage to space stations, satellites and astronauts, electrical installations on the ground, subsea telecommunications cables and communication with shipping and oil rigs in the North.

‘Now when the polar ice is melting, the importance of the Northern areas is increasing. We therefore need space-weather forecasts to predict communication breakdown and indicate whether satellites should be temporarily shut down,’ says Wojciech Jacek Miloch, associate professor at the Department of Physics, UiO. He heads the nearly forty-strong interdisciplinary research group 4DSpace, which investigates turbulence and instability in the ionosphere.

The ionosphere is the topmost layer of the Earth’s atmosphere, from 80 to 500 kilometres above ground. The gas in the ionosphere is electrically charged and referred to as plasma. The ionosphere is important for radio communication, because it reflects radio waves back to Earth.

‘To us as physicists, it is crucial to understand the physical processes that give rise to the irregularity of the plasma,’ Miloch points out.

So what is really happening? Solar explosions spew out tremendous amounts of plasma clouds consisting of electrically charged particles, such as electrons, protons and helium particles. These particles hit the Earth at the unimaginable speed of 400 kilometres per second.

And precisely here, in the electrically charged clouds, so much turbulence is created that radio signals are reflected in the wrong directions. This affects the communication systems GNSS (the global satellite navigation system). GPS (Global Positioning System) is a part of it. Turbulence is a classic problem that continues to stump physicists.

‘We need this research to better understand how the northern lights affect GNSS, how long the GNSS system will be out and how great the disturbance will be. When the Sun heats up the atmosphere, it becomes ionized. Electron density will then increase in this area,’ Dag Lorentzen, professor at the University Centre in Svalbard (UNIS) explains.

Svalbard is located in the perfect spot to study the daytime aurora. The nighttime aurora most frequently occurs on the same latitude as Tromsø.

To reveal the inner life of the ionosphere, the researchers have access to a number of installations, three of which are located in Svalbard.

One of these installations is called SuperDARN (Super Dual Auroral Radar Network), which is an international network of huge radar stations spread out over large parts of the globe that measure the activity in the ionosphere.

When Apollon visited Svalbard last summer, physicists were setting up SuperDARN on a plateau a short distance to the east of Longyearbyen. The installation consists of two rows of antennas, the tallest measuring more than twenty metres in height. Their price tag: NOK 10 million.

‘The Svalbard radar is Norway’s contribution to the global SuperDARN network,’ says Professor Jøran Moen, who for many years has been the driving force behind UiO’s research on northern lights.

Thanks to the new antennas in Svalbard, researchers can now study the ionosphere in the polar areas. In fact, they can see as far as 3000 kilometres.

SuperDARN measures everything on a large scale. In other words, the researchers obtain no detailed images. The researchers are especially keen to use SuperDARN to investigate how the solar wind generates so-called convection cells in the ionosphere. When the plasma from the Sun is pushed down towards the Earth, it is transported between convection cells that change shape continuously until they reach the area where the northern lights are ignited.

‘Space researchers therefore use the northern lights as a tool to study what happens when the solar gases collide with the Earth’s atmosphere,’ says PhD scholar Xiangcai Chen, who is writing a thesis on the physics of the northern lights in the Arctic.

The other large installation in Svalbard is called EISCAT (European Incoherent Scatter Scientific Association). It is located only a few hundred metres from SuperDARN. EISCAT has two enormous parabolic antennas measuring more than 30 and 40 metres in diameter and is used to examine much smaller sections of the ionosphere than the SuperDARN, but with much higher resolution.

The researchers use EISCAT also to measure the temperature, ion velocity and electron density of the plasma.

Some years ago, Professor Jøran Moen used data from EISCAT to ascertain that every day, the Earth pumps out an astonishing 300 tonnes of oxygen through a 100 metre wide and 50 000 kilometre-tall fountain reaching from the ionosphere out into space. Only half of the oxygen is sucked back to the Earth. Svalbard has this air fountain directly overhead from four to six hours every day.

Observing only in the dark season

The third major installation is the Kjell Henriksen Laboratory, named after physics professor Kjell Henriksen (1938–1996) at the University of Tromsø. The old northern lights observatory was located further down the valley, but had to be moved because too much light pollution from Longyearbyen. The new facility was placed right across from Eiscat.

This is an optical laboratory that functions only in utter darkness. In summer, the glass cupolas are covered in aluminium to prevent the light from damaging the instruments. The laboratory houses 32 optical instruments, one of which is owned by UiO. Here, the researchers can examine what goes on in the ionosphere and how the northern lights change over time.

‘The lens is an extreme fish-eye that photographs the entire firmament,’ Dag Lorentzen explains.

It captures quite specific wavelengths of the northern lights. The data are subsequently compared to the observations made by SuperDARN and EISCAT.

Shooting a rocket into the northern lights

When researchers observe the ionosphere from the ground, they have to study it from a distance of several hundreds of kilometres. To obtain a more detailed image they need to measure what is happening right in the middle of the northern lights. The only way to do this is to launch rockets.

‘The rockets provide us with unique observations that we cannot obtain from the ground or from satellites,’ Miloch points out.

The researchers have been launching rockets for years already. These have been packed with sophisticated instruments that could measure the finer structures of the plasma clouds in a matter of minutes. None of them are off-the-shelf merchandise, and many of them have been constructed at UiO’s physics workshop.

One of the main instruments in the rocket is a set of small antennas that can measure the electron density of the ionosphere. It was constructed four years ago by a group of PhD students and professors at UiO, and at the time it could measure electron density a thousand times faster than NASA could do. The distance between the observation points was then reduced from seven kilometres to a fraction of meter.

Today’s rockets provide detailed images only along the missile’s trajectory, i.e. in two dimensions, but this is insufficient. To provide a spatial image, the researchers need to observe the phenomenon in three dimensions.

A rocket with six mini-probes

This summer, UiO will participate in the most sophisticated research rocket ever to be launched. Once up in the ionosphere the rocket will spew out other measuring devices.

This is the first time ever in world history that researchers will use this technique to study the northern lights.

‘Then we will finally be able to study the turbulence in three dimensions,’ Miloch tells us.

To begin with, they need to test whether the new system will work. In order to remain stable, the rocket must spin. The principle is the same as when you ride a bike: if you do not move, you fall over. Once up in the ionosphere, the spinning rocket will throw out six mini-probes. Thanks to centrifugal force, the mini-probes will slowly but surely move away from the parent rocket.

The mini-probes, which are only ten centimetres wide and four centimetres tall, will remain in contact with the parent rocket until they reach a distance of one kilometre away. In practice, this means that the researchers have from four to nine minutes to take their measurements, depending on the altitude of the rocket.

‘The main challenge is to ensure that the mini-probes can communicate with the rocket.’

All communication with the ground takes place while the rocket is airborne. When the mission is completed, the rocket and the mini-probes crash into the sea. Even though the rocket travels through the northern lights at the dizzying speed of one kilometre per second, the instruments work so fast that the distance between each individual measurement amounts to no more than a few centimetres.

‘In practice this means that we can obtain close to continuous measurements.’

This summer’s rocket will be launched from Andøya island in cooperation with the Arctic University of Norway in Tromsø. The rocket will measure the plasma structure of dust clouds. The dust clouds affect the echo signals from radar, and the physics of this phenomenon is poorly understood. The researchers take this opportunity to check whether all the instruments in the parent rocket and in the mini-probes function as foreseen.

They are planning to launch their own research rocket from Ny-Ålesund in Svalbard in 2018. By then, they need to be certain of hitting the bull’s eye.

This rocket is three metres in length, weighs 140 kilos and will reach an altitude of 350 kilometres. It costs NOK 20 million, and the researchers have only one attempt. Consequently, they need to estimate the best possible time for a launch.

‘Launching a rocket is tricky.’

They have a period of ten days to launch the rocket, with a possible launch window of a couple of hours each day.

‘During this period, the airspace can be closed at short notice. We depend on having northern lights and not too much wind, otherwise the rocket may crash,’ Miloch explains.

To determine the optimal launch time, they rely on observations from SuperDARN, EISCAT and the Kjell Henriksen Laboratory.

‘This permits us to see the arrival of the powerful plasma clouds that disturb communication with satellites. Once we know the velocity of the plasma clouds, we can estimate the best launch time for our  rocket. However, launching a rocket always entails an element of gambling. We need to predict what will happen during the next five to ten minutes,’ Miloch tells us.

Before the solar storm hits the Earth they may receive a small hint, at an hour’s notice, from the ACE satellite one and a half million kilometres away on the gravitational equilibrium between the Earth and the Sun.

‘Then we can make a prediction of the chances for northern lights,’ Dag Lorentzen says.

The launch can be aborted at the last moment. Nearly, that is.

‘We may in fact abort the launch when only forty seconds remain, but at that time virtually all processes have started,’ Lorentzen explains.

In the future, Miloch hopes to be able to launch rockets that carry up to one hundred mini-probes.

‘This will produce a swarm of instruments that accompany the rocket through the northern lights.’

The first challenge is to make these mini-probes small, while ensuring that they can communicate. In addition, the researchers want to equip the mini-probes with instruments that can measure not only electron density, but also magnetic and electrical fields.

‘Then, we need to replace sophisticated electronics with a small chip.’

In this endeavour, the researchers are helped by nanotechnologists at the Department of Informatics at UiO, but that’s another story.