The world’s most efficient and environment-friendly solar cells

In the future, solar cells can become twice as efficient by employing a few smart little nano-tricks. 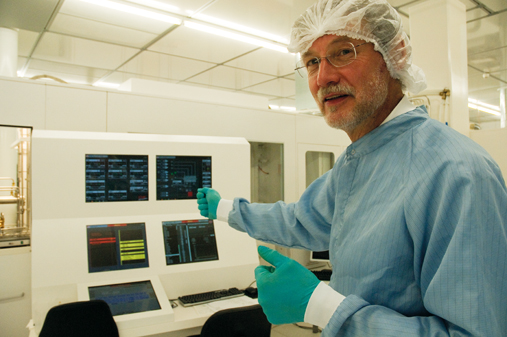 NANOTRICKS: Bengt Svensson and co-workers are currently producing the solar cells of the future out of nano-materials, which will capture sunlight in both the red and the blue spectrum. That means that the efficiency can be doubled. In addition, these solar cells will be environment-friendly and be produced solely from materials that are in great abundance on Earth. Photo: Yngve Vogt

Researchers are currently developing the environment-friendly solar cells of the future, which will capture twice as much energy as the cells of today. The trick is to combine two different types of solar cells in order to utilize a much greater portion of the sunlight.

“These are going to be the world’s most efficient and environment-friendly solar cells. There are currently solar cells that are certainly just as efficient, but they are both expensive and toxic. Furthermore, the materials in our solar cells are readily available in large quantities on Earth. That is an important point,” says Professor Bengt Svensson of the Department of Physics at the University of Oslo (UiO) and Centre for Materials Science and Nanotechnology (SMN).

Svensson is one of Norway’s leading researchers on solar energy, and for many years, he has headed major research projects at the Micro and Nanotechnology Laboratory (MiNaLab), which is jointly owned by UiO and the Foundation for Scientific and Industrial Research at the Norwegian Institute of Technology (Sintef). Using nanotechnology, atoms and molecules can be combined into new materials with very special properties.

The physicists are now making use of the very best of nanotechnology and will develop new solar cells in the European research project, Solhet (High-performance tandem heterojunction solar cells for specific applications), which is a collaborative project involving UiO, the Institute for Energy Technology (IFE) at Kjeller, Norway and the University Polytehnica of Bucharest, together with two other Romanian institutions. The Solhet team at UiO comprises Raj Kumar (Post-doctor), Kristin Bergum (Researcher), Edouard Monakhov (professor) and Svensson.

Their goal is to utilize even more of the spectrum of sunlight than is possible at present. Ninety-nine per cent of today’s solar cells are made from silicon, which is one of the most common elements on Earth. Unfortunately, silicon solar cells only utilize 20 per cent of the sunlight. The world record is 25 per cent, but these solar cells are laced with rare materials that are also toxic. The theoretical limit is 30 per cent. The explanation for this limit is that silicon cells primarily capture the light waves from the red spectrum of sunlight. That means that most of the light waves remain unutilized.

“The red wavelengths of sunlight generate electricity in the silicon cells in a highly efficient manner. We’ve done a great deal of work with silicon, so there is only a little more to gain.”

The new trick is to add another layer on top of the silicon cells. This layer is composed of copper oxide and is supposed to capture the light waves from the blue spectrum of sunlight.

“We have managed to produce a copper oxide layer that captures three per cent of the energy from the sunlight. The world record is nine per cent. We are currently working intensely to increase that percentage to twenty per cent. The combination of silicon cells in the one layer and copper oxide cells in the other means that we’ll be able to absorb far more light and thereby reduce the energy loss. With this combination, we can utilize 35 to 40 per cent of the sunlight,” emphasizes Bengt Svensson.

There will also be other layers in the solar cell panel. On the back surface, a protective glass layer will be deposited, along with a metal layer that conducts the electricity out of the solar cell. The front side will have an antireflective coating, so that the light rays are captured rather than reflected away.

The solar cell panel will be very thin. The thickness of the individual layers will vary between a hundred and a thousand nanometres. A thousand nanometres equals one micrometre. A single hair is ten times thicker. One of the trickiest moves is to create a special layer that will be as thin as one to two nanometres. Apollon will have more to say about that, but first a few theoretical explanations are in order.

The band gap gives an indication of how much energy will be required in order to create conducting electrons.

Nanotechnology is used to design materials with a very specific band gap.

When the photons, i.e. light particles from the sun, strike the solar cell, energy is delivered to the solar cell. This energy impels an electron through the band gap and into what is called the conduction band, where the electrons can be gathered up and removed as energy.

“The challenge is to develop cobber oxide with a band gap that is precisely large enough so that the electrons can be captured before they fall back down to their electron holes. We’ve been working on this for a number of years, and we are beginning to understand how this can be done.”

Although time is scarce, there is a ray of light: if the electrons are removed from the electron holes for more than a millisecond, it is possible to capture them.

Chaos between the layers

One of the unsolved problems in the new solar cells is the boundary areas between the different layers.

“When the layers are deposited on top of each other, chemical reactions take place that reduce or in the worst case destroy the solar cells.”

One problem is the boundary surface between the solar cell layer that captures energy from the blue light and the outermost layer of zinc oxide that both protects the cell and conducts the electricity out of the cell. Unfortunately, the electrons die at this boundary surface.

The two solar cell layers each function well on their own, and that is where Apollon gets to the point. The problem arises when the layers are deposited together. That is when the adverse chemical changes occur.

One possibility is to deposit other substances between the layers so that the chemical changes are minimized.

There are many ways to create this buffer layer.

“We want to use a hydrogen-rich material. That can pacify the chemical changes and increase the lifetime of the electrons and electron holes.”

Another possibility is to lace the buffer with gallium oxide, but this substance is not exactly environment-friendly. Pure gallium is toxic.

By making the buffer as thin as just one to two nanometres, the chemical effect is minimized.

From theory to practice

The theoretical modelling about how the buffer layer ought to appear is done at the University Polytehnica in Bucharest.

“They are very good at theoretical modelling,” says Bengt Svensson.

Professor Laurentiu Fara at the University Polytehnica in Bucharest tells Apollon that, among other things, they have calculated and simulated the optimal thickness of the solar cell layers, the best possible way for the layers to be deposited together, and how it is theoretically possible to extract the greatest possible amount of electricity.

“We have great expectations that the solar cells can become reliable and profitable, but we’re very aware that a great deal of hard work still remains,” emphasizes Laurentiu Fara.

UiO is performing the experimental part of the work. IFE will develop the prototype for producing the solar cells in great volumes. In addition, IFE is the main coordinator for the whole research project.

“We have already worked with silicon-based solar cell technology for many years in collaboration with the Norwegian solar cell industry. Now we’ll look into how the two solar cell layers can be adapted to each other in order to get the greatest amount of power out of the whole solar cell and into how the two cells affect each other both optically and electrically,” say Sean Erik Foss and Ørnulf Nordseth at IFE.

They tell us that very many researchers and technology firms are working now on the new type of solar cells with silicon in the bottom layer and a layer of “more exotic materials” on top.

The Romanian solar cell company, Wattrom, intends to show that it is possible to manufacture the new solar cells.

“The technology is inexpensive, it can easily be scaled up to large volumes, and it’s not more expensive to produce solar cells out of copper oxide than out of silicon,” says Bengt Svensson.

He thinks the solar cells will be very profitable to produce because the utilization of the light spectrum will be high.

“Even a tenth of a per cent increase in the efficiency yields substantial economic gains for the solar cell industry, but we’re talking here about a much more dramatic increase in efficiency.”

Moreover, the solar cells will function well even in those parts of the globe where the sun is low on the horizon, such as Scandinavia.

He says that efficient solar cells can change the whole way of thinking about energy in the future.

“We have an enormous resource in the sun. If we could utilize the sunlight one hundred per cent, an hour of the annual sunlight would meet all the energy needs on Earth. Thus, the potential is enormous. In principle, it is possible to meet the whole world’s energy needs with sunlight. Solar energy is actually the renewable energy source that has the greatest potential of all. That is what we want to utilize,” says Bengt Svensson.

• 99 per cent of today’s solar cells are made from silicon. They capture the red spectrum of sunlight. Most of them utilize only 20 per cent of the sunlight.

• It is possible to increase the utilization of the silicon cells to 25 per cent by integrating them with toxic and rare substances.

• Norwegian and Romanian researchers are currently developing new solar cells that will capture up to 40 per cent of the sunlight. That will be done by depositing a new layer on top of the silicon cells. This layer will efficiently utilize the blue spectrum of sunlight.

• When the two layers of solar cells are deposited on top of each other, chemical reactions unfortunately occur that destroy the output of the solar cells. The big challenge is to develop a nano-thin protective layer between the two layers.

• The development of the new solar cells is a European collaborative project between UiO and IFE in Norway and three Romanian institutions.