Can houses die? Iron-age longhouses were burned and buried

Burial mounds may equally well mark the tomb of a house as that of a human, archaeologist argues. 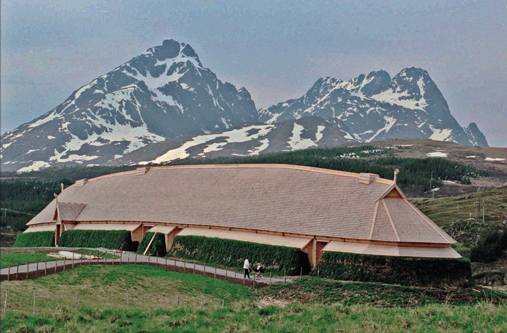 LOFOTEN: How could the three-aisled longhouse persist in Scandinavia for 3000 years, while society underwent fundamental changes? This 83-metre-long Viking house has been recreated at Borg in Lofoten, and is the largest ever found. Photo: NTB Scanpix

Marianne Hem Eriksen is a postdoc at the Department of Archaeology, Conservation and History. In an article in the European Journal of Archaeology she investigates the causes of this practice.

‘I studied seven different house burials from the Iron Age in Scandinavia, in five different locations: Högom in Sweden; Ullandhaug in Rogaland; Brista in Uppland, Sweden; Jarlsberg in Vestfold; and Engelaug in Hedmark,’ Eriksen tells us.

The custom of setting houses on fire and placing burial mounds over of the house remains may be reminiscent of a cremation. Eriksen argues that the burial mounds may equally well mark the cremation and burial of a house – not necessarily a human being.

‘In some cases we have been unable to find human remains, even in places where we could expect such remains to have been preserved. Nevertheless, archaeologists have more or less implicitly assumed that somewhere or other, there must be a deceased individual.’

According to the researcher, it is striking that the three-aisled longhouse persisted for nearly 3000 years of Scandinavian prehistory – especially when considering the major upheavals that occurred throughout this period.

The period from the early Bronze Age to the Medieval period was characterized by huge and fundamental social, political and religious upheaval. Towards the end of the Bronze Age the chieftains ruled, before the bronze networks of that age collapsed. The centuries preceding the birth of Christ are said to be characterized by equality and egalitarianism. This period was followed by the rise and fall of the Roman Empire and the Age of Migration with its great movements of migrant populations – this could indeed be described as ‘Europe on the move’. In addition, we have the Vikings and their raiding and colonization towards the end of the first millennium AD.

‘Throughout this period, people in Scandinavia continued to build their houses in more or less exactly the same way as before. That’s really intriguing,’ the archaeologist says.

The life cycle of a house

How can the longevity of the three-aisled longhouse be explained? Marianne Hem Eriksen has turned to anthropology to learn about people’s relationship to their houses in various cultures.

‘To people in Madagascar, a house has its own life cycle. It is born, lives, grows old and dies. The Batammaliba people of West Africa perform rituals during the construction of houses, the same rites of passage that they perform for newborn babies, adolescents and adults. When the house is completed, they perform a ritual where they “kill” the house. The house has been alive during the building process, and must be killed to make it habitable for people. Many cultures believe that the house is metaphorically linked to the human body.’

The archaeologist’s study of the seven longhouses reveals similar features. In her PhD thesis she shows that there is a connection between burial sites and the doors leading into the house. This has a ritual significance. There are examples of human body parts having been placed under the thresholds, or of graves being placed near entrances. In other cases, burial mounds have been placed over the door to the house, as if to close the entrance, she explains.

In some cases, the burial mounds have been laid over houses that were burned down several generations earlier. This lends weight to the theory that the house was the key element.

‘It’s costly to invest hours of work in building mounds over the ruins of old houses that have been there for centuries. This is a financial as well as a ritual investment, and it’s interesting to explore why they did this. We may imagine, for example, that they aspired to establish a linkage between real or mythical ancestors and themselves and connect with them, whether they were their descendants or not. They may have thought strategically and sought to legitimize their own power base.’

‘Many of the Norse words that are related to houses are derived from the human body. The word “window” comes from wind and eye and refers to openings in the walls where the wind comes in. The word “gable”, i.e. the top of the end wall of the house, means head or skull.’

This connection between bodies and houses may have led them to think that a house has some kind of essence, some kind of soul, Eriksen says.

This may have been the reason why people at that time wanted to give their house a proper funeral when it had served its purpose, and that is perhaps why it was set on fire.

‘The purpose of a cremation is to reduce the body to fragments, perhaps to liberate the soul or the essence, and this is interesting, since the houses may have been regarded as having an essence. So by burning down the house they may have had a wish to cremate it, to liberate the life force of the house. If houses and people could be part of a network that had “agency” – vitality and personality – this could at least be part of the explanation for the longevity of longhouses in Scandinavia.’

Carrying our house with us

Even today, we can find examples of linkages between people and houses. Perhaps the difference between the people of the Iron Age and modern humans is not so great after all? We all have a strong relationship to the house we live in – perhaps especially the house where we grew up.

‘The French philosopher Gaston Bachelard says that our first house is written into us, we carry it with us through life. Although we have walked up thousands of stairs, we never forget the staircase of our first childhood home, we recognize instinctively the steps that creak, and we never stumble. We carry the house with us for life.’

By Toril Haugen
E-mail this page