Exhaust gas is to blame: Ground-level ozone is damaging crops

Exhaust gas emissions have doubled the amount of ground-level ozone. Vegetation is being destroyed. Food production is decreasing. Researchers now fear that the damage is greatest in the Arctic regions. 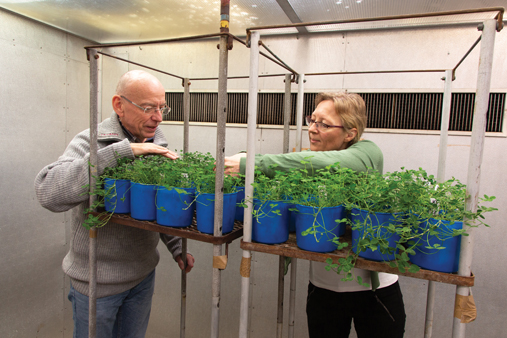 OZONE TEST: Frode Stordal and Ane Vollsnes are researching how plants are damaged by ozone. This is done in the phytotron, an advanced facility where it is possible to test what happens to plants under different climatic conditions. Photo: Yngve Vogt

The consequences are alarming. By as early as 2010, international researchers determined that the ozone at ground level reduced the production of wheat by seven to twelve percent, soybeans by six to sixteen percent, rice by three to four percent, and corn by three to five percent. In 2004, researchers at the University of Gothenburg published an article in which they stated that ozone pollution reduced potato crops by as much as twenty percent. In a scientific article in 2018, Swedish and other European researchers determined that ozone at ground level destroys nearly ten percent of wheat production in the Northern hemisphere.

Now scientists fear that the ozone layer along the ground can do even more damage in Arctic regions. The plant physiologists and atmosphere physicists at the University of Oslo have therefore joined forces to research this.

To understand their research, we need to briefly look at why the ozone has increased at ground level and why it damages vegetation.

Ozone is formed indirectly as a result of our modern lifestyle. The culprits are combustion furnaces and internal combustion engines. The most well-known, everyday examples are the exhaust gases from cars, ships and planes. When combustion occurs at high temperatures, the two main components of air, namely oxygen and nitrogen, react with each other. The so-called NOX gases are formed. These are the gases nitric oxide (NO) and nitrogen dioxide (NO2). The NOx gases are catalysts. Catalysts speed up chemical reactions. The NOX gases have the unfortunate property that they help carbon monoxide (CO), methane (CH4) and volatile organic compounds (VOCs) to produce ozone. This only occurs during daytime. The explanation for this is that the chemical reaction must also receive a helping hand from solar UV radiation.

The concentration of ozone is at its greatest during daytime. During the night, it drops. The reason for this is that ozone can only be formed in daylight and breaks down when it hits plants and other things. When the sun rises, the concentration is at its lowest. The level then increases again during the course of the day.

NOX gases can also be formed in completely natural ways. Lightning is an example of this, but it is man-made pollution that is the cause of the tremendous increase in ozone at ground level.

“The ozone layer at ground level is an issue that has snuck up on us,” says Frode Stordal.

How does ozone damage plants?

One might wonder how ozone damages plants. Just like us humans, leaves breathe too. This happens as part of the well-known process of photosynthesis. Thanks to the chlorophyll, plants can convert sunlight, carbon dioxide (CO2) and water (H2O) into glucose (C6H12O6) and oxygen (O2). Glucose is the energy plants need in order to survive. The oxygen is the waste material.

In order to receive carbon dioxide and at the same time emit oxygen and water vapour, the leaves have tiny pores, which are called stomata. Damage occurs when ozone penetrates through these pores.

Plants have an elegant means of defending themselves against the ozone hazard. The weapon of defence is antioxidants. They neutralise ozone.

“The level of defence varies from plant to plant. If the plant has a lot of antioxidants, the ozone does not need to do so much damage. Although ozone does not get into the cells themselves, it does cause damage between the cells. Unfortunately, ozone reacts very easily with other elements. New chemical compounds are formed that further penetrate into the cell and damage them from within,” explains researcher Ane Vollsnes at the Department of Biosciences at the University of Oslo.

May be worse in the Arctic

And we are now getting to the main point. At the equator, the days are 12 hours long. In the northern regions, it can be light around the clock.

“The time that the ozone has the opportunity to penetrate plants, thus, lasts much longer in the Arctic regions than further south. Although the concentration of ozone is greater around the Mediterranean than in Norway, the plants in Norway may still be more vulnerable. The plants may not be able to recover until the next day. We must investigate whether the pores in the plants are open for large parts of the day in the northern areas. However, it is also conceivable that the plants have a circadian rhythm, despite the lack of nights. We don’t know enough. This needs to be studied further,” says Ane Vollsnes.

Vollsnes has carried out experiments with a type of clover that was more damaged by ozone when the nights were bright. The clover suffered visible damage. The leaves were full of dots. These dots are dead tissue.

Testing takes place in the phytotron in the basement of the biology building at Blindern.

The phytotron is an advanced facility where scientists can grow plants and test what happens to them under different climatic conditions. In the majority of the sixteen growth chambers in the phytotron, researchers are able to control the temperature, precipitation, amount of light and the length of night and day. To check how the plants respond to ozone, researchers are able to have identical climates in all chambers, while varying the amount of ozone. Such experiments are not possible to conduct in greenhouses. When the experiment is conducted, it is then at the mercy of the weather.

“In the phytotron, we can manipulate a single factor at a time to see the effect it has.

This is the first time anyone has investigated how the length of day affects the ozone pollution of plants in the north.

Unfortunately, there is a danger that the amount of ozone will increase in Norway and in Arctic regions. This is due to the oil production in the Barents Sea and the anticipated increase in shipping traffic to Asia along the Norwegian coast and Siberia when the ice retreats.

Ane Vollsnes points out that how ozone affects agriculture in Norway, such as the production of wheat and oats, has not been researched. In the first round, they will research how different types of clovers and timothy grass, which are used as animal feed for cows and sheep, are damaged by ozone pollution. They can already determine that clover and timothy are vulnerable to ozone – the question is how vulnerable.

“We are talking about great possible, but hidden losses,” says Ane Vollsnes.

Her objective is to find the ones that can withstand the ozone pollution the best. Here she has cooperation with the Finnmark Agricultural Council. The idea is to communicate the results to the farmers in the north.

The results from the phytotron will also be used in a climate model in order to more precisely describe the relationship between ozone and climate change.

Although Europe and the United States have become better at reducing emissions from combustion furnaces and internal combustion engines, the situation is worse in Asia. There, ozone pollution continues to increase.

“This is where population growth is greatest and the standard of living is increasing the most. This is happening at the same time as the need for food is increasing. This is an unfortunate combination. More ozone will affect food production,” states Ane Vollsnes.

In India and China, ozone has already been shown to reduce the production of both rice and soy.

Unfortunately, air doesn’t care about borders. The ozone is moved by the strong westerly winds around the northern hemisphere – moving first towards the United States and then towards Europe.

“The question is whether we will reach a threshold level or if it will get dramatically worse,” Frode Stordal concludes.

• Ozone is formed when exhaust gas emissions react with oxygen. The reaction must receive a helping hand from solar UV radiation.

• The concentration of ozone at ground level has more than doubled in 150 years.

• Researchers now fear that crops are even more damaged in the Arctic regions.