Their internal wounds represent the greatest health problem for Palestinians. A life of uncertainty is the worst of them. 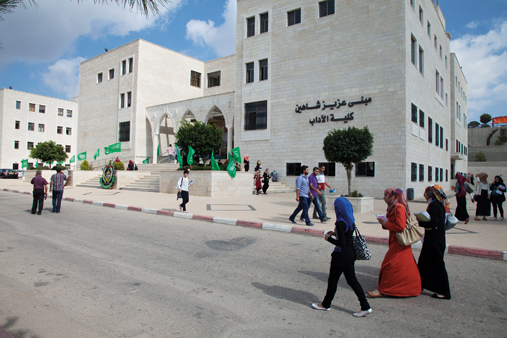 Birzeit University in Ramallah. In one of the new buildings is the Department of Public Health. Foto: Trine Nickelsen

Spread out over a number of hills on the outskirts of Ramallah, the unofficial capital of Palestine, lies Birzeit University. It is almost surprisingly large and modern. Pale limestone buildings line up in harmony with the surrounding landscape, over which you have a panoramic view from the campus.

Here are large flower beds and everything is spotless. Green Hamas banners hang from many of the buildings, and the students appear to walk around with an air of confidence and optimism. Large building cranes testify to the university’s continued growth, fully funded by donors and sponsors from all over the world.

In one of the new buildings we find the Department of Public Health.

In a bright office sits Professor Rita Giacaman, a key person in the Palestinian academic community, as well as a close colleague of many at the University of Oslo, which 25 years ago initiated a collaboration that would prove to be extraordinarily fruitful.

Giacaman is a Christian Palestinian and was born in Bethlehem, but in 1967 she emigrated with her family to the USA, where she took her medical degree, before returning to establish a department of public health at Birzeit University in 1978. This gradually developed into an interdisciplinary research institution where she has worked for fully 36 years since, until recently as its director.

“When I travelled around the occupied Palestinian territories in the late 70s to investigate various aspects of life there, I was shocked by the deep poverty, the unspeakable sanitary conditions, the poor housing, the widespread malnutrition and the high rate of child mortality. My colleagues and I noted especially that malnutrition was more widespread among girls than among boys. It appeared to us that health is a ‘social construct’, as we used to refer to it then, long before the idea of ‘social determinants of health’ had seen the light of day, the recognition that social, political and material conditions determine health and life expectancy to a great extent.”

During the initial years, Giacaman headed the work on a model for the primary health services in the Palestinian territories, and it remains effective to this day. She established a women’s health programme that recognized that women’s health needs extend far beyond biological reproduction.

After the first intifada, when a large number of young men suffered injuries or disability, she was joined by a number of other organizations to develop a model for rehabilitation.

“Biomedical indicators are crucial to identify illness among the Palestinians and they can reveal quite a lot, such as the fact that communicable diseases have largely been eradicated, while metabolic syndrome, a condition that includes high cholesterol levels, hypertension, diabetes and overweight, has increased dramatically. Moreover, breast cancer strikes a growing number of women at a worryingly young age.”

“Among our young people, satisfaction with life was the lowest in the world.”

But is not the health of people living under conditions of continuous conflict and political violence being affected?

“In the midst of the second intifada we undertook a study of quality of life among young people in the Ramallah district and compared the results to those of young people in other countries. Among our young people, satisfaction with life was the lowest in the world. We know that exposure to violent incidents and persistent harassment has a major impact on health.”

The population is affected by what Giacaman refers to as social disorders, meaning disorders that are inflicted by social conditions: armed conflict, military occupation, violence, torture, arrests, demolition of houses and general discrimination, as well as violence internal to Palestinian society and disenchantment over corruption and inefficiency.

“There is always an if... and nothing is certain. This is part of the cause of social disorder.”

“Many have no visible injuries, but are living with internal wounds. A large proportion of the population, not least the young generation, suffers from anxiety and depression. They see no hope for the future.”

Giacaman and her colleagues have developed a framework for understanding the effects that war and war-like conditions may have on health, in addition to the purely biomedical injuries. “We have developed a measure for anxiety, disturbing emotions, insecurity, harassment – all of these have a negative effect on people throughout their lives and cause illness.”

The Palestinian population is governed and controlled not only through brute force, she says, but also through the deliberate propagation of uncertainty and unpredictability in daily life.

Giacaman wants a good public health system for the entire population and seeks to ensure that the research results produced by her academic community are transformed into practical policies.

“Our institute remains completely dependent on international funding. New aid organizations show up regularly, often with agendas that are incompatible with the Palestinians’ needs. For example, we are told to do research on AIDS, since we are a developing country. Even when we tell them that this is not a problem here, since we registered only 18 cases in 1988, they still donate money for this purpose. The despair over the situation of the Palestinian population and what it may cause is not on anybody’s agenda. This is a main issue for us, but it fails to obtain international support.”

“The collaboration with our colleagues at the University of Oslo is the best we have ever had,” Rita Giacaman emphasizes to Apollon. “They came to us 25 years ago and asked: What are the most important issues for you? What do you need most? What are your priorities? I was absolutely dumbfounded.”

“These are academically outstanding and extremely hard-working people who nevertheless have remained humble enough to listen: Espen Bjertness, Gerd Holmboe-Ottosen, Petter Kristensen, Jak Jervel, Kaare Norum and many others. We immediately started to work together. Our main concern at that time was to train our colleagues here in scientific methodology through a doctoral programme. The collaboration with Oslo has been of decisive importance in developing our capacities, so that we are now able to undertake research in a number of areas – for the benefit of Palestinian public health.”

In 2009, the prestigious journal The Lancet published a special issue on the health conditions in the West Bank and Gaza, documenting that the occupation causes mental as well as physical illness. See: